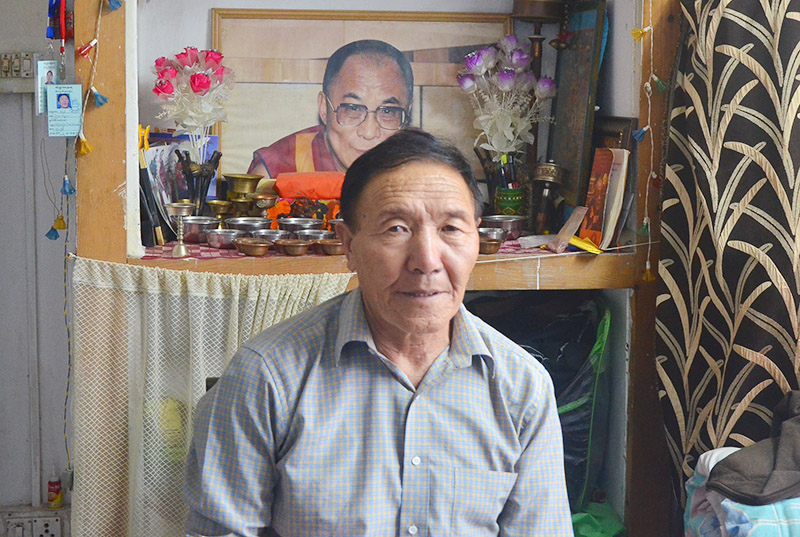 Dharamshala: - Tens of thousands of people stood gazing at a group of prisoners, amongst them was Dhondup Wangyal. The crowd staring up at the stage were all from his hometown.

His hands,which had been broken by Chinese soldiers after he was paraded through the town a few days earlier, were bound behind his back by an iron chain and on stage he was forced onto his knees.

Describing the moment Wangyal said, "One of the Chinese ministers stepped on my head and said that, there has never been a person who has been vilifying our great leader Mao, how could this kind of small person be against our great nation, we must kill him."

A Chinese official then began to chant, "counter revolutionaries will be tried!" soldiers and the crowds of spectators followed.

Dhondup Wangyal was born in the Kham Karze region of Tibet into the family Dhoring-Khu-Tsong in 1948. There were a total of nine family members, the father Yonten Gyaltso, mother Yama Dolma and uncle Trimley Namgyal. Dhondup Wangyal was one of five boys and one girl.

Tibet was invaded by China in 1951 and conflict between Tibetan rebels and the Chinese army started in 1956 in the Kham and Amdo regions. Rebellion led to the 1959 Tibetan Uprising and the Tibetan political and spiritual leader, His Holiness the Dalai Lama, fled Tibet to seek refuge in India.

Yonten Gyaltso and Trimley Namgyal were amongst the many Tibetans fighting for independence. Yonten took part in an uprising in his village and protested against the Chinese Communist Party. Each morning he would offer incense to the Gods, calling for "Freedom for Tibet and long live His Holiness the Dalai Lama". He was later arrested by the Chinese and imprisoned.

In Lhasa, the Tibetan capital,Trimley Namgyal protested alongside hundreds of monks against the Chinese authoritarian dictatorship and was eventually arrested by the Chinese military and taken to Sichuan, a Chinese province in the southwest. He was placed in the largest jail in the region, Dhang-Zheng-Dhong.

The Chinese military made their family suffer;they robbed them of their valuables and destroyed their ancestors' houses. "During this time Chinese rules were very confusing, we didn't know how to speak or how to act.

As a family it was a very difficult situation, the Chinese soldiers were violent and stole from us. My family was imprisoned without trial. The reality I saw in this world was full of division," Wangyal said,"I hated the Chinese government and during this time the Dalai Lama had already left for India. Life was not good for the Tibetan people."

By age 16Wangyalhad become a supporter of the People's Republic of China's President, Liu Shaoqi, whose views were at odds to Chairman Mao's authoritarian rule, "Many people were dying from the Chinese famine and Liu Shaoqi spoke out against Mao's policies, saying that the Chinese people want freedom and the rules made by Mao need to change."

Angry at Chinese authorities and oppression, Wangyal and a close friend, Lobding,defaced a photograph of Mao. They dug out both eyes and bound both his hands with iron chains, they then scrawled across the photograph 'freedom to Tibet, rights for religions, and long live Chinese minister Liu Shaoqi'.

They placed the photograph at the centre of Rong-Pa-Tsang palace in their village and not long after Chinese soldiers and local riot police rounded up the villagers. They were all checked and questioned and many were arrested.

"My friend Lobding and I were thinking that this situation was started by us, why should other people suffer under the Chinese military?"said Wangyal, "We decided to tell the police that we did it. The people didn't do anything wrong."

Confessing to the authorities he said, "Without the regime of Chinese Communist Party, there wouldn't be colonial rule in Tibet and we wouldn't be suffering bloody crackdowns and painful family separations. Thus we, the young generation of the snow land seek freedom for Tibet, we will fight against red China until our last breath. The police said 'you look like a small person but you have quite a spirit' then they beat us."

In 1964, Wangyal was sent to prison in Sichuan where prisoners faced horrific conditions and prison guards routinely beat them, sometimes so severely they feared they would be killed.Describing his arrival he said, "When I arrived there I almost died because they beat me so much, I never thought I would go back to being a normal person."

Prisoners were given only a mouthful of tsampa (roasted barley flour mixed with the salty Tibetan butter tea) and water and were forced to work long hours in the fields.

For political prisoners like Wangyal conditions were a lot worse than those suffered by regular prisoners. They were made to work longer hours, given less food and subjected to harsher treatment from the prison guards.Wangyal said, "I would be ordered to go to the field and work, we were not allowed to talk or to look at anyone and we always had to be bent over in the field, we were never allowed to stand upright."

During this time Deng Xiaoping, a Chinese statesman and future leader of China, and Liu Shaoqi, China's head of state, were winning national prestige for their contributions to China's economic reconstruction following Mao's 'Great Leap Forward' but their views conflicted with the political ideologies of Mao, including showing support for the freedom in Tibet. In 1966 - when Wangyal was 18 years old -Mao launched the Cultural Revolution out of fear that economic policies and political opposition could lead to restoration of capitalism and end the Chinese Revolution.

The movement gave Mao the power and influence to purge the Communist Party of his perceived enemies at the highest levels of government. Schools and universities were closed and young Chinese were encouraged to randomly destroy old buildings, temples, and art. As part of the elimination of what Mao called 'the four olds', Old Customs, Old Culture, Old Habits, and Old Ideas,6,000 Tibetan monasteries were destroyed with only 12 left standing.

In 1969 during the Ninth Party Congress, the Communist Party read the verdict that Liu Shaoqi was, "a criminal traitor, enemy agent and scab in the service of the imperialists, modern revisionists and the Kuomintang reactionaries". He was publicly beaten and tortured for more than a year and eventually killed.

Ten years later in December 1979 Dhondup Wangyal was released from jail, "the local police said that today you are free from us," said Wangyal,"but it doesn't mean you are free in this world, we will watch your activities, don't make any mistakes again.

I was very afraid of them and because of my mistake I had suffered fifteen years in the jail. Had I not repaid them enough?"

Despite returning to his family, Wangyal lived in fear of the Chinese authorities, "I went into hiding and regularly moved between the 18 districts in the Kardze Tibet autonomous prefecture. Whilst I was in hiding I met with some Chinese acquaintances who I knew from prison, we decided to escape to major Chinese cities so that it is difficult for the authorities to find us," said Wangyal.

He remained in hiding for twenty years, "In 2000 my brother called me and told me to come back to my village I agreed because most of the Chinese leaders looking for me had either died or moved on," he said.

Despite the Cultural Revolution ending in 1976Wangyal discovered little had changed in China's policies toward Tibet, "In 2002 in order to discourage us from growing traditional crops, the Chinese Communist Party ordered the people of my village to stop farming and instead to grow paddy fields within three years. If we couldn't grow rice we would have to pay a fine. We were also encouraged to grow thorns in the field, which would destroy the traditional crops."

Wangyal attempted to speak out but was told his views were illegal, "I told them for many years Tibet has depended on crops and animals. We should not follow the Chinese policies."The livelihoods of many Tibetans were being destroyed, leading to poverty in the community.

He once again found himself the subject of intense surveillance and was regularly questioned by the Chinese police. Fear of further imprisonment led to him having making a dangerous decision many Tibetans still face today.

"On 1st January 2006 four family members and I escaped from Tibet to India. After more than a month my family safely arrived at the Tibet reception central in Nepal," he said.

Although Wangyal is now living in exile, free from oppression in Dharamshala the Tibetan struggle continues and many from Wangyal's generation are now facing having to pass it to new generations.

Reflecting on passing this burden, Wangyal said,"I have two boys and I want them to grow up educated, I am an old man and will not be around for long. My father died under the Chinese rule and he said to me "You must strive to end the communist rule in Tibet". So now I tell the same thing to my boys."