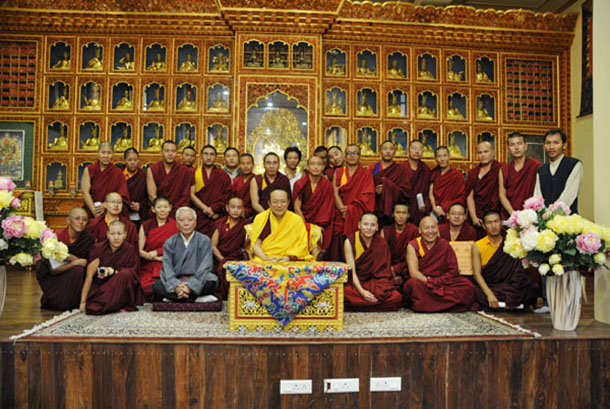 Dharamshala: - The Department of Religion and Culture (DRC) in collaboration with Library of Tibetan Works and Archives (LTWA) has organised a two-week modern 'Science Workshop for Monks and Nuns' at Palpung Sherabling Monastery, Bir, from 18 August.

According to Tibetan administration media report, 'the chief guest, His Eminence Tai Situ Rinpoche, graced the opening ceremony held at the shrine of Palpung Institute with a very interesting and profound talk. Mr. Gyeling Dhondup Dorje, the Secretary of DRC and Geshe Lhakdor, the Director of LTWA, were also present at the ceremony and highlighted the aims and objectives of organising the workshop during their speeches.'

There are 25 participants, 19 monks and 6 nuns from 23 different monastic institutions of various tradition and places. The workshop is scheduled to conclude on 30 August 2014 and courses include introduction of Physics, Neuroscience, Life Science and Mathematics. Venerable Geshe Lhakdor, the Director of LTWA, will give a lecture on Buddhism and Science on 18 August.

This workshop is an effort to fulfill "the vision of His Holiness of the Dalai Lama" and commitments made during "Monastic Education Development Conference" that took place in May 2013 at Gyuto monastery. DRC also provides monthly salary to science teachers of several monastic institutions who run regular science classes.