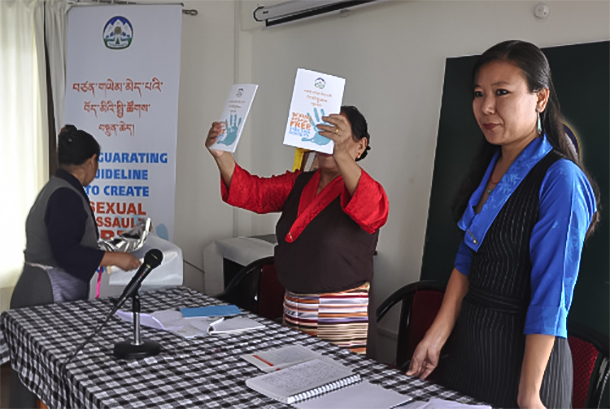 The report said "the guideline was created under the guidance of the Kashag to pre-empt sexual assault cases in the Tibetan community."

Ms. Tsewang Dolma Shosur, Joint Secretary of the Department, released the book. Over 60 representatives from various Tibetan institutions based in Dharamshala, including staff of the CTA, Tibetan schools and non-governmental organisations, attended the ceremony.

"The guideline is aimed at creating awareness about sexual assaults, vulnerability issues and promote corrective measures to enhance the involvement of the whole section of society to work towards creating a sexual assault free Tibetan society," said Tenzin Tseyang, co-ordinator for the women's empowerment desk.
She said "the guideline contains specific reference to parents, school authorities, workplace and youth. Many expert views had also been included to make it relevant, effective and applicable."

"The Department of Home hopes to mitigate the vulnerability of Tibetan women and men in sexual assault cases with the release of this guideline," she further added.