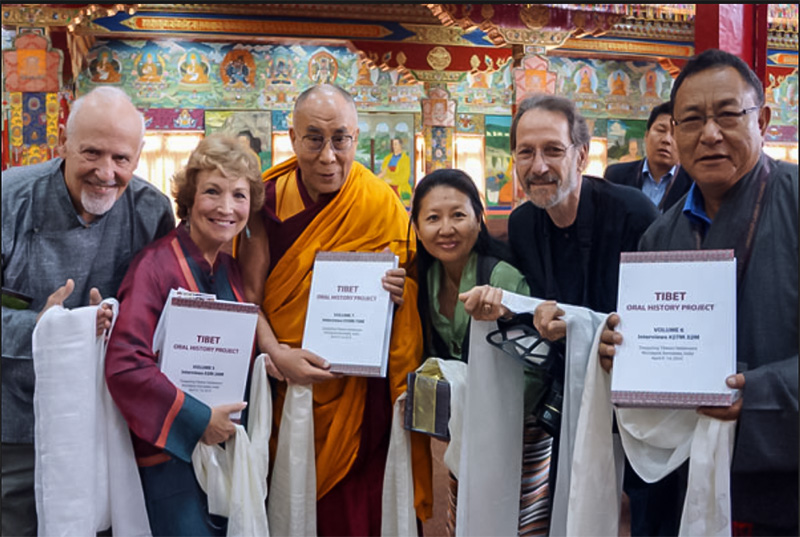 The focus of this endeavor was to interview revered teachers, lamas, and rinpoches who were attending the teachings given by His Holiness the Dalai Lama. To this end, 18 of the 25 interviewees were individuals with a religious or monastic background. The average age of the interviewees was 79, although the team also interviewed a younger monk; this man gave testimony at the Spanish High Court which tried Chinese government officials for human rights abuses.

TOHP reportedly was grateful to the Office of His Holiness the Dalai Lama for being given the opportunity to meet with His Holiness on December 29th and to present the Dalai Lama with transcripts and DVDs from previous interviews. His Holiness expressed warm appreciation for TOHP's efforts and offered to hold one of the volumes for a photo with TOHP's team. The team said it was honored to meet and receive the blessing of the 102nd Gaden Tripa Thubten Nyima Lungtok Tenzin Norbu, spiritual leader of the Gelug school of Tibetan Buddhism.

TOHP desired to express its gratitude to the Tibetan elders who shared their stories. Their interviews were key in providing descriptions of age-old Tibetan culture and monastic traditions. Many elders bravely dealt with painful memories in relating their eyewitness accounts of tragic events surronding the invasion and subsequent occupation of their country. Several elders stated they were thankful for the opportunity to preserve Tibet's history by recording what they had seen with their own eyes and to express their hopes for Tibet and the preservation of the Buddha dharma, which enabled them to survive.

TOHP was honored to record the early monastic educational experiences of Professor Samdhong Rinpoche, former Prime Minister of the Tibet government-in-exile. TOHP also videotaped the fascinating and historically significant account by Arjia Rinpoche, who described in detail how the Chinese installed a government-appointed Panchen Lama. Another interviewee was a Tibet resistance fighter trained by the CIA in Colorado, who was parachuted into a remote area in the Himalayas where the Tibetans were trying to ward off the invasion of Chinese troops.

The Tibet Oral History Project's expressed its strongest gratitude to His Holiness the Dalai Lama, who advised that the stories of Tibet's elders be recorded before they were lost forever. TOHP is an endeavor committed to following His Holiness's advice. In this case, that meant making these valuable oral histories known worldwide through the Internet and by translating them into Chinese.

To date, TOHP has documented 209 oral histories of Tibetan elders, posted 120 interview transcripts on the Internet, sent the available transcribed collection to 12 libraries around the world, including the US Library of Congress, Oxford and Stanford Universities, the University of California, Berkeley and the Library of Tibetan Works and Archives in Dharamsala, India. Some interview video excerpts are now available in Chinese on TOHP's website and on YouTube with plans to translate more in the future.

This endeavor and its follow-up work of transcribing the interviews and publishing them on the Internet has been made possible by the financial support provided by the International Campaign for Tibet's Rowell Fund, the Firedoll Foundation and the Shelley and Donald Rubin Foundation, as well as individual donors.

On the advice of His Holiness the Dalai Lama, the Tibet Oral History Project was initiated in 2003 by Marcella Adamski (Ph.D) to record the early life experiences of Tibetan elders, who were forced to flee their homeland in 1959 following the Chinese invasion and subsequent occupation. The Tibet Oral History Project is a "non-profit organization committed to making the elders' oral history interviews accessible via the Internet in order to share with the world the culture and history of Tibet."