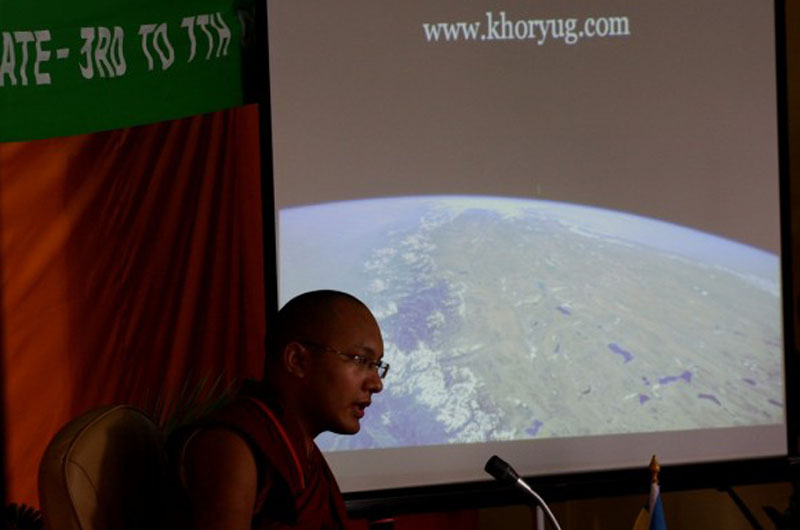 Dharamshala: His Eminence the 17th Gyalwang Karmapa Ogyen Trinley Dorje launched the new website dedicated to environmental protection in the Himalayan region initiated by a network of thirty-six Buddhist monasteries across India, Nepal and Bhutan.

Launching the website at Tergar Monastery in Bodhgaya on Tuesday (22 December), Gyalwang Karmapa underlined the need to work for the environment as a logical extension of our Dharma practice, connecting it to our Mahayana commitment to benefit others, and to live in a way that is consistent with the basic fact of interdependence.

Gyalwang Karmapa urged the audience to ask themselves whether the beautiful aspirations and prayers they make in the morning are carried out in their actions throughout the day. Often when opportunities arise to work to benefit others, we do not seize them, and if we ask ourselves why this is so, it is usually because we are simply working for our own egocentric concerns. Too often we behave as if others existed for us, and as if the Earth was ours alone to use as we wish," he added. "Our actions based on such attitudes have had cumulative effects that are devastating for the Earth itself, he said.

We, nevertheless, dominate the planet as if it were ours alone, and we are responsible for virtually all the damage done to it. This attitude is inappropriate as well as damaging given our total dependence on others, and especially on the earth itself, for our well-being and for our very survival. Without the plants that yield oxygen, we would not even be able to draw a single breath, Gyalwang Karmapa said.

Using a powerpoint presentation to underscore his points with images, Gyalwang Karmapa took the audience on a dazzling tour of the galaxy, pointing out along the way that we humans have nowhere else to go if we destroy the earth's natural environment.

"Yet unlike humans, the earth is endlessly forgiving," he noted.

"When someone commits heinous crimes, such as murder, he is shunned and expelled from human society. Yet however much harm we do to her, the Earth never banishes us. Despite all the damage we have done thus far, she has never given up on us, but continues to yield her resources to us with great generosity. We, therefore, all have a responsibility to consider what practical steps we can do to respond in kind to this great kindness that we receive from the Earth," Gyalwang Karmapa said.

Dekila Chungyalpa, Director of the Greater Mekong area for the World Wildlife Foundation (WWF) and Khenpo Kelsang Nyima from Rumtek spoke on the significance of environmental protection.

The event concluded with a moving rendition of the song 'Aspiration for the World', composed by Gyalwang Karmapa himself and sung by a chorus of students from the Tibetan Children's Village School.

In addition to a large number of Tibetan monks and nuns, translators were on hand to deliver the message to the international audience in nine different languages. Many devotees, including foreign students who are in Bodhgaya to attend the upcoming Kagyu Monlam and the annual winter teachings, attended the event.

www.khoryug.com - a bilingual website in Tibetan and English, offers educational resources on importance of forest protection, water conservation, wildlife preservation, climate change adaptation and waste management, and a forum for people interested in the environment.