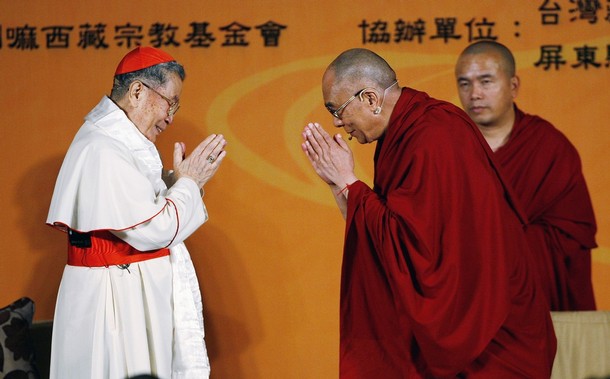 Taipei: Tibetan spiritual leader His Holiness the Dalai Lama and Catholic Cardinal Shan Kuo-Hsi took part in a series of religious talks titled "A Dialogue Between Man and Nature" on Wednesday morning, in Kaohsiung city, southern Taiwan. Prior to the proceedings, both parties conducted prayers for victims of the recent typhoon. Cardinal Shan emphasized the necessity of advance government preparation for natural disasters and the reduction of carbon emission. His Holiness the Dalai Lama stressed the need for expert opinions and viable solutions.

The talks began at 9:30. The founder of the Commonwealth Magazine, Yin Yun-Peng, served as the moderator. The Mayor of Kaohsiung, Chen Chu, the Vice-Mayor Lee Yong-De, the former President of Examination Yuan, Yao Chia-Wen, the President of the Taiwan High Speed Rail Nita Ing, and over 1,000 others were present at the meeting.

Despite the surface differences between the two religions, the aim of both Catholicism and Buddhism is to recognize the innate goodness of humanity. The Tibetan leader spoke of universal happiness; that well-being of individuals, families and society as a whole must begin with personal adherence to spiritual practice. As the world is plagued by conflict in the name of religion, we must practice tolerance, respect and mutual cooperation in order to promote world peace.

Shan spoke on behalf of the Catholic community: the Catholics advocate religious dialogue, and will continue to promote cooperation, understanding, and mankind's peaceful coexistence with nature. The latter must begin with forest preservation, soil conservation and bridge construction; it is essential to preserve the livelihood of the victims of the disaster whilst protecting them from a future one. We cannot sacrifice human well-being by failing to reduce carbon emissions.

Edited by Yangsham and Natalia, The Tibet Post International.