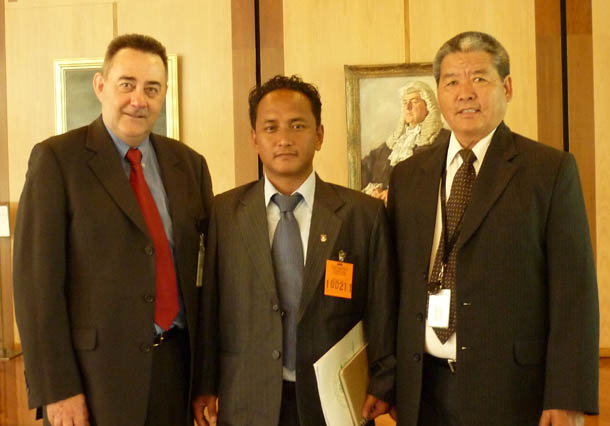 Canberra: The head of Environment and Development Desk at Department of Information and International Relations of the Central Tibetan Administration (CTA), Mr Tenzin Norbu, met with members of the Australian All-Party Parliamentary Group for Tibet (AAPGT) and briefed two Australian parliamentary committees on Tibet's environmental issues in Canberra on 10 February.

The Australian All-Party Parliamentary Group for Tibet has currently 28 members out of the 226 parliamentarians from both houses of the parliament, and has grown in size and activity in the last few years. During his meeting with seven members of the AAPGT, Mr Norbu raised environmental concerns on the Tibetan plateau such as forced removal of nomads from their grasslands and exploitation of natural resources by the Chinese government. He also discussed the importance of Tibet as the third pole and as the water tower of Asia. He was able to offer suggestions on how the Australian government can help to protect the Tibetan environment including providing guidance to the Chinese policy makers in making the right choice of policies to help restore the grasslands and the nomadic communities.

He later briefed on the same issues with members of the Human Rights Sub-committee of the Joint Standing Committee of Foreign Affairs, Defense and Trade and House Committee of Climate Change, Environment and the Arts. Apart from these three formal meetings, he met privately with a Greens senator and the international adviser to the leader of the Greens Party.

During his visit to Canberra, Mr Norbu also met with a social scientist who has done extensive research on the Tibetan environment for the last six years.

Mr Tenzin Norbu also travelled to Melbourne for a presentation organised by the Australia Tibet Council under the auspices of Victoria Naturally Alliance. Mr Norbu provided a powerpoint briefing on the many environmental problems facing Tibet, focusing particularly on nomad displacement, hydropower dams and melting glaciers. The audience of 95 people, mostly members of environmental NGOs, were shocked at the many difficulties Tibet faces, and asked what they could do. Many of those attending the presentation left their e-mail addresses for follow up. Several expressed the wish that there be more such briefings and visits, since the environment movement in Australia is quite well developed, but not well aware of Tibet.

Mr Norbu also was interviewed by the editor of the bimonthly magazine Habitat, the flagship of the Australian Conservation Foundation, due to feature EDD and its work in its May 2011 issue.