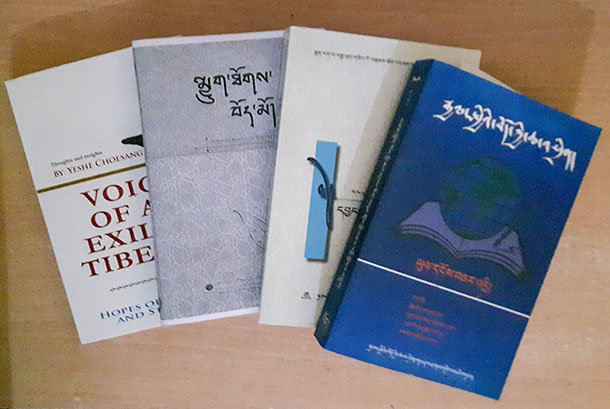 The book is primarily a compilation of articles related to the modern issues facing all Tibetans—at home and in exile—and seeks to serve as a response to how Tibet is portrayed by China and other outlets. This English book also examines the current political situation in Tibet and focuses on the untold suffering and destruction brought to Tibet under Chinese rule.

The Second is a new Tibetan poetry book in May 2015, in accordance with a website that launched in 2014. The book, a compilation of Tibetan poetry, is titled, “Roar within Rhythm,” and the website calls for pieces of culture and literature through independent contributors. The pieces focus on Tibetan way of life, culture, language and religion, and steer away from politics. These new features are an outlet for Tibetan writers in exile and within Tibet to celebrate and share literature and poetry.

In 2016, a new collection of more than 30 exclusive interviews titled “The real Subject in Focus.” The book focused on Tibetan democracy in-exile and human rights in Tibet, specially on recent Tibetan elections. It is a collection of 30 interviews of interesting people in the Tibetan society, including top government officials, NGO leaders and former political prisoners.

HLT also published more touch-and-feel books, which began with the third Tibetan-language book titled, "Women Who hold the Pen" in 2018, collection of interviews with exiled Tibetan women. The book was launched by Acharya Yeshi Phuntsok, Deputy Speaker of Tibetan Parliament in Exile, at the Tibet Post International office in McLeod Ganj, Dharamshala, India, on February 14, 2018.

HLT is planning to publish Mr Choesang's second book titled "China's Super-Sensitive Is A Big Fat Liar: Disgusting tool of political propaganda & Cutting Tibet Off from The Rest of The World". This book focuses on how the Chinese government uses "sensitive" as a propaganda tool, turning it into as manipulative political and ideological activities that target Tibet and Rest of the World. Its long-term efforts to manipulate and control information and systematically ignoring not only Tibet and Tibetan people, but also increasingly lukewarm attitude toward equity, justice, rule of law principles, democratic values and peace.

TPI currently publishes a downloadable English-language print journal on its website. The TPI has launched a fortnightly newspaper. The eight-page broadsheet, containing a wide range of news and features covering events both inside Tibet and the exiled Tibetan world, was launched by the Tibetan Parliament-in-exile’s Speaker, Penpa Tsering, at the Dalai Lama’s main temple in McLeod Ganj, on Monday, December 10, 2012, to coincide with International Human Rights Day and Nobel Peace Prize Day of His Holiness The Dalai Lama of Tibet.

The journal currently carries a selection of articles from the website and, as it develops, we aim to also include the following: