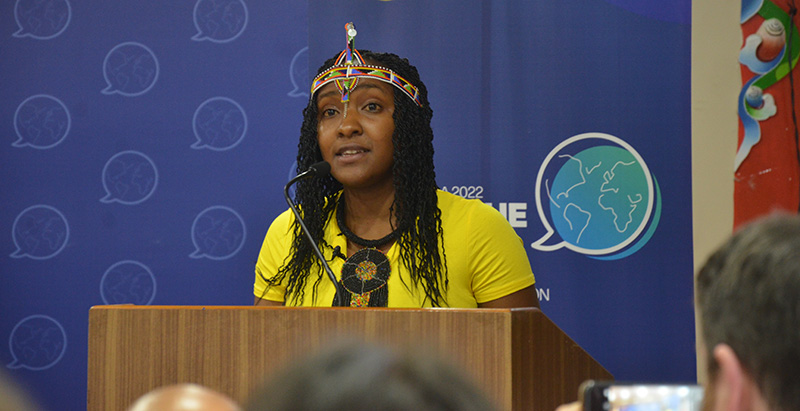 Dharamshala — "I believe that an open heart is where the seed of true action lies in each of us. I believe in our human capacity to care deeply and act collectively. I believe that we can absolutely find our way out of the planetary crisis we face, but to do so we need to change our way of thinking and start telling new stories on what is important and what is possible," said Elizabeth Wanjiru Wathuti, Kenyan climate activist at Dialogue for Our Future: A Call to Climate Action Conference, in Dharamshala, on April 21, 2022.

To commemorate Earth Day 2022, various Tibetan campaigns are organising a climate action conference entitled Dialogue for Our Future: A Call to Climate Action, on April 21-23 in Dharamshala. The International Campaign for Tibet, Czech Support Tibet, the Tibet Policy Institute, and EURAC Research are co-hosting the conference. The event will be a three-day simultaneous online and in-person meeting with climate activists, scientists, and entrepreneurs to inspire individual and collective climate action.

The Dialogue for Our Future: A Call to Climate Action will address the real-world measures that individuals, communities, businesses, and governments can take to help restore balance to the biosphere through discussions with experts and campaigners in climate change, as well as with His Holiness the Dalai Lama. This will be an opportunity to highlight the importance of ethical climate practices, to assess the role each of us can play in the transition away from fossil fuels, and to highlight the urgency of taking action.

The opening event, which took place on April 21, 2022, at 5:00 pm at Norbu House in McLeod Ganj, Dharamshala, H.P, India, featured keynote speaker Elizabeth Wanjiru Wathuti, Kenyan climate activist and founder of the Green Generation Initiative. Wangpo Tethong, Director of the International Campaign for Tibet Europe, welcomed the audience. He quoted His Holiness the Dalai Lama in his welcome address, “When we see pictures of the Earth from space, we see no boundaries between us; just this one blue planet." Setting the tone for the event, Tethong welcomed Ms Wathuti to address the event.

Wathuti began her speech by recounting, "Over a year ago, I had the opportunity to participate in the opening ceremony of a very different kind of conference, the COP 26 climate conference in Glasgow. This summit was billed as the last chance for humanity to avoid catastrophic climate change."

She added, “However, we still somehow find ourselves on the precipice of an interconnected, triple planetary emergency of a worsening climate, nature and pollution crisis.” She questioned this trend despite the advances in technology, using that as a platform to talk about the problems in her own home country, Kenya. She gave the staggering statistics of more than two million in Kenya and more than ten million in the Horn of Africa region, facing climate-related starvation.

The climate activist reminded the audience that this crisis is not limited to one place, but that the burden is often disproportionately borne by the least developed nations. “I believe that an open heart is where the seed of action lies in each of us. I believe in our human capacity to care deeply and act collectively. I believe in our ability to do what is right if we feel it in our hearts and I believe that we can absolutely find our way out of the planetary crisis we face, but to do so we will need to change our way of thinking and start telling new stories on what is important and what is possible. This last insight is something I have drawn from the legacy of the late Professor Wangari Maathai”, She noted that it has been exactly 45 years since Professor Maathai founded the Green Belt movement and concluded her speech by reminding the audience of the importance of individual action.

Kunda Dixit, editor, and publisher of Nepali Times, moderated the session. He began the question and answer portion by asking about Wangari Maathai and her impact on the environmental history of the African continent. Ms Wathuti stated that "she was an African woman who stood up at a time when African women had no voice in society." She urged the young population to use the available technologies for the good of all.

The session also focused on the political, economic, and commercial aspects of the climate crisis, with wars like Ukraine and Kuwait centered on fuels. The climate activist spoke about climate finance and justice with equal access to resources.

A young Tibetan woman questioned the possibility of environmental work by young people in such an oppressed community in Tibet, where there is little space for civil society movements and young people are arrested if they speak out. She commented that the case of Tibet, “Those people who are defending the earth, the planet, nature, but whose lives are still in danger. They are still not able to do it in a safe or open way. I think this is the moment where we talk about privilege in other parts of the world - how the world can come together; how young activists, for example, from other states where there is privilege to talk about the challenges in different parts of the country - how they can bring their voices and their privilege to support some of the work that you are trying to do and amplify. I think it's important to amplify voices in the face of challenges like this and I have had friends reach out to me. They are from similar states, they are struggling and they are trying to speak out. I would love to connect with the young activists here because one of the main things that have continued to work in solidarity, which allows us to educate each other. In unison, we can amplify voices from places where they don't have the opportunity to speak."

The session was followed by a press conference. One of the speakers at the conference, Sonam Wangchuk, told the media, "In a fragile place like Tibet, I always say that in today's world, people have a say. They have a say through the ballot (right to vote) and the wallet. The wallet is a great voting machine. What you use your money for will be promoted, you can choose not to promote it and things will settle down. So I appeal to the people of the world: do not expect the United Nations to do anything. If you do not want China to do what they are doing to Tibet or to their own environment, we must vote against them with our wallets. Do not buy products from such companies, such regimes, such countries that despise nature and are in league with the forces that are melting our glaciers and causing droughts for our farmers."