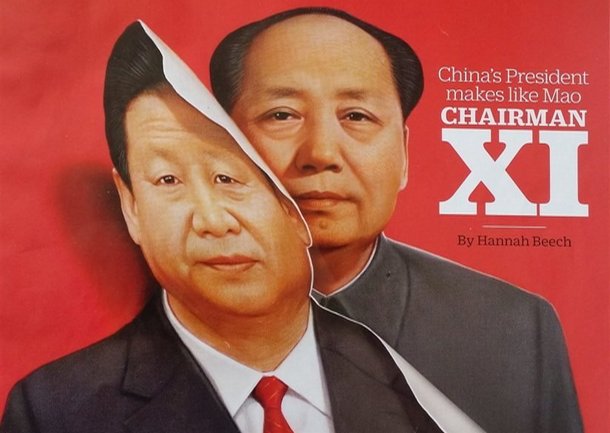 Global media has been reacting to the news of the Communist party of China central committee on Sunday, proposed changing the country’s constitution to allow dictator Xi to remain in power beyond his scheduled departure in 2023. Now he’s poised to make characteristics of the history of Chinese regime by staying in office for potentially decades to come that was designed to guard against Mao-style personality cult in China.

“The Communist party of China central committee proposed to remove the expression that the president and vice-president of the People’s Republic of China ‘shall serve no more than two consecutive terms’ from the country’s constitution,” China's mouthpiece Xinhua propaganda agency, reported. “The proposal was made public Sunday.”

That’s because the Chinese Communist Party on Sunday proposed changing the country’s constitution to allow Xi to remain in power beyond his scheduled departure in 2023. The party will vote on the proposal — which would abolish term limits by removing the phrase that says China’s president and vice president “shall serve no more than two consecutive terms” — in direct contradiction to the diffused democracies of the West.

An English-language editorial in the Global Times, a party-run tabloid, claimed “all Chinese people” backed the move and saw Xi as the right man to lead them into “a new era for a hopeful China”. “The change doesn’t mean that the Chinese president will have a lifelong tenure,” the newspaper claimed.

"It was a typically dreary communique from the party-controlled propaganda agency. But to those who have spent their lives battling to decrypt the enigma that is elite Chinese politics, the text’s historic significance was unmissable, the Guardian said in its report.

'Xi’s commitment to “Ethnic Unity”, “Economy Development” and “Social Stability” in Tibet under the banner of “Peaceful Liberation”, nether seeks a peaceful solution nor a signal for a new reform of more openness. But it clearly shows the communist regime is further strengthening an integral element of another “cultural revolution” project in Tibet,' says Yeshe Choesang, editor of the Tibet Post International. "One must say Xi is revealing the true nature of a Communist regime in Tibet, a similar sense of strategic inviolability characterized by the 20th century’s greatest mass murderer, Mao Zedong."

Under dictator Xi, the regime took even more control of the disputed South China Sea, Tibet, Eastern Turkistan by bullying its neighbors. But as Xi accumulates even more power, expect the Chinese military to act even more aggressively on the world stage, throwing its weight around in ways that will worry US allies like Japan, South Korea, and Vietnam — and possibly even challenging the United States.

There’s little stopping Xi from realizing his vision. Last October, the Communist Party’s more than 2,300 delegates voted unanimously to enshrine Xi thought on "Socialism with Chinese Characteristics" for a New Era into the party’s constitution. The addition of that phrase — which some analysts joke is as unwieldy in Chinese as it is in English — effectively means that Xi’s vision for China is officially part of state doctrine.

The Chinese Communist regime has only added only one man, dictator Mao, to the constitution while he was alive. The party added Deng’s name and vision for China to the constitution after he died in 1997. No other Chinese authorities have had their name added to the totalitarian "constitution."

"Under banners of 'Socialism with Chinese characteristics,' the similarities shared with the 20th century’s greatest mass murderers and dictators from Stalin to Mao, Xi’s vision for China is officially part of the same state doctrine," the Tibetan newspaper says "behind which dictator Xi sought to hide Mao’s “Marxism” inherited from “Sovietism”, a violent strategy of conquering and terrorising the world into pieces, adopting wholesale thenceforward, which continues to be the cornerstone of the repressive policy to the present."

After Mao's death, the nature of Chinese dictatorship changed in some way, but nobody has predicted this earlier returning. Under Xi, China took even more harsh control of the disputed South China Sea and occupied Tibet, Eastern Turkistan by bullying the world, including its neighbors. But as Xi accumulates even more authoritarian power, expect the Chinese military to act even more aggressively on the world stage, throwing its weight around in ways that will worry US allies like Japan, South Korea, and Vietnam — and possibly even challenging the United States.

Shirk, who was US deputy assistant secretary of state under Bill Clinton, told the Vox: “What is going on here is that Xi Jinping is setting himself up to rule China as a strongman, a personalistic leader – I have no problem calling it a dictator – for life.”

Shirk, who was US deputy assistant secretary of state under Bill Clinton, said: “What is going on here is that Xi Jinping is setting himself up to rule China as a strongman, a personalistic leader – I have no problem calling it a dictator – for life.”

The first five years of Xi’s reign, which began after he was named the Communist party’s general secretary in late 2012, have seen what many call the worst political crackdown in decades. Activists, dissidents and intellectuals greeted Sunday’s move with trepidation.

“It will get worse, for sure … the consequences will be very severe,” warned Wu’er Kaixi, a prominent Chinese dissident who fled into exile after helping lead the 1989 Tiananmen protests.

Wu’er, who now lives in Taiwan, was among those who signed an “emergency statement” condemning Xi’s decision to scrap presidential term limits as another step towards “tyranny”. “We shall not stay silent … this country is our country, and we cannot allow the ambitions of a few people lead [it] into a dark abyss,” the petition read.

Predictably, state media – from which China’s authoritarian leader has demanded “absolute loyalty” – put a more positive spin on the decision to scrap rules that were introduced in the 1980s to guard against the kind of catastrophic cult of personality that grew up around Chairman Mao, making China the best example of the greatest enemy to freedom and democracy.

The regime's iron-fisted political system has bestowed to occupation, colonization, political repression, cultural assimilation, and environmental destruction among other factors for nearly a century, repeatedly boasted of so called "China’s dream" as a “great power” in the world.

The current dilemma and future path of Chinese regime is not that of a world is continuing the legacy of living prosperity. But following a "dead man's dead legacy", the TPI newspaper said.