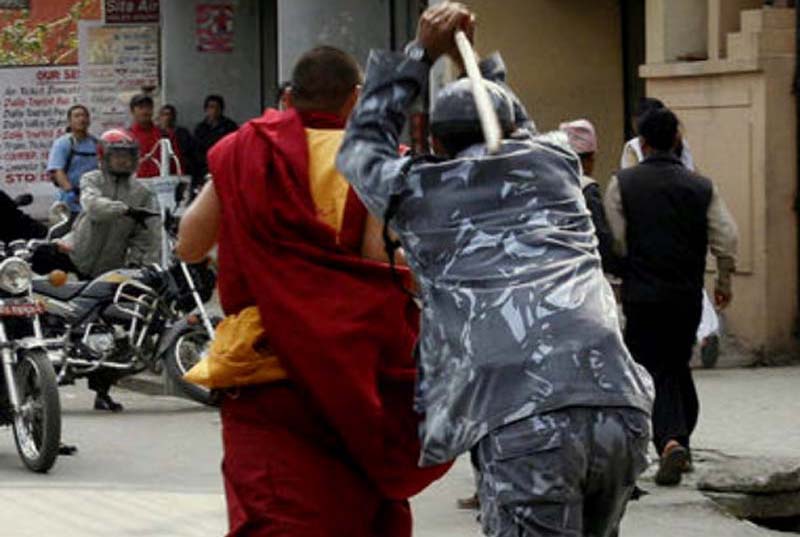 Kathmandu — Nepal and Tibet straddle the Himalayas and for hundreds of years tradesmen have crossed high mountain passes to journey from one country to another. Due to the relatively high of traffic from salt traders coming from Tibet to Nepal there have long remained influences and examples of Tibetan culture flourishing in Nepal.

In the Mustang Valley, Jigme Dorje Palbar Bista, the last king of the former Buddhist Kingdom still looks down upon the Tibetan Plataea, albeit now in a ceremonial role. In Panauti on the edge of the Kathmandu valley lies Namo Buddha one of the most sacred pilgrimage sites for Buddhists in Nepal and home to the stunning Tibetan monastery which dominates the skyline.

In Boudhanath the Stupa is surrounded by monastery's and pilgrims. In many ways Tibetan culture is inextricably linked with Nepal, salt traders have been making their way through the country as part of the old trade routes for centuries. Many of Nepal's ethnic groups such as the Sherpa's can trace their lineage back to tradesmen from Tibet. However now it is no longer salt traders making this arduous journey, but instead Tibetan Refugees.

In 1959 following the Chinese invasion and occupation of Tibet, thousands of Tibetan sought refuge in Nepal. Due to political oppression and lack of religious freedoms, refugees have continued to make the arduous journey across the Himalayas into Nepal.

However when crossing the border into Nepal they are no longer accepted with open arms and are now facing increasing hostility and oppression as well as increasing numbers not being allowed to reside and settle in Nepal. Pre-1989 all Tibetan refugees were granted refugee cards and allowed to settle freely. However post-1989 the legal status of Tibetan refugees has deteriorated and as a result they are undocumented and then can no longer legally work, own property, businesses or even vehicle's.

In recent years there have been growing cases of oppression and curtailment of basic freedoms for Tibetan refugees living in Nepal with clampdowns on their ability to protest as well as claim asylum. In 1989 Nepal signed the informal 'Gentlemen's agreement' which states that Nepal working alongside the UNHCR and the Government of Tibet in exile, will allow Tibetans to travel through Nepal while awaiting authorization to travel to Tibetan refugee communities in India. However in recent years there have been several claims that Nepal has violated the terms of this agreement and repatriated Tibetan refugees back to China, where it is widely understood they can face repression, imprisonment and even torture.

There are currently around 20,000 refugees living in Nepal, however according to UNHCR they have no legal status since the government has not signed the 1951 Refugee Convention. As the lack of documentation means working legally becomes very hard for Tibetan refugees, they often require aid or donations to survive. Yet the overwhelming majority would much prefer to work. While there are numerous welfare groups where Tibetans make handicrafts and carpets, the overwhelming majority of avenues for income are closed off.

Politically they have a chronic lack of representations and avenues for justice. The Tibetan Youth Congress based in Dharamshala is banned in Nepal and manage to exist semi-secretly in Kathmandu. Boudha, the home for the majority of Tibetans in Nepal, is an area crawling with CCTV and informants. Reports from Human Rights Watch and the Human Rights Organization of Nepal have documented numerous infringements on people's freedom of speech, freedom of protest and freedom of assembly. The influence from Beijing is also growing, in line with huge investments in Nepal by China.

These funds for development and infrastructure have simultaneously led to clampdowns in the activity of politically active Tibetans. The Chinese embassy in Kathmandu both on the Dalai Lamas birthday and on March 10, which marks the date of the Tibetan uprising in 2010, have a huge security presence and no protests are allowed in the vincinity.

What makes these issues worse is Nepal has international obligations to look after and improve conditions for these refugees. While Nepal has not signed the 1951 UNHCR Refugee convention, it is a signatory to the International convention on Civil and Political Rights, the Convention on rights of the Child and the Convention against torture and other cruel, inhumane or degrading treatment of punishment.

These treaties establish the legal obligation for Nepal to respect the principle of non-refoulment which states that refugees should not be forcibly returned to a country where the lives or freedoms would be threatened what this means is that there is a clear legal precedent for Nepal to look after and not deport Tibetan refugees. These refugees are at high risk of repression therefore legally and ethically should be granted the right to stay in Nepal. Nepal's treatment of Tibetan refugees therefore is forbidden by its own international legal commitments.

Nepal is currently facing a barrage of issues that are not limited to post-earthquake reconstruction, on-going political crisis and the fuel blockade. All of these are pressing issues for the Nepali government to deal with. In this context the conditions for Tibetan refugees are not a top priority for government officials. However by allowing documentation, the Nepali government would remove a major obstacle for Tibetans and allow them the opportunity to be self-sufficient and independent. This would cost very little for Nepal yet the changes and new opportunities available for Tibetans would be immense.