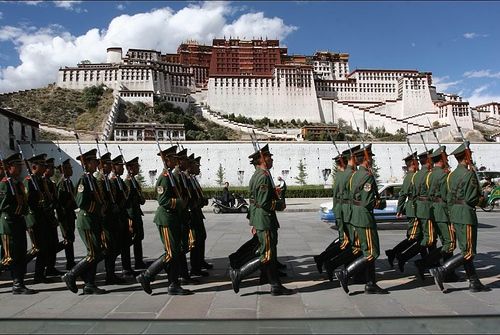 Dharamshala — Reports from Tibet indicate a crackdown on 'illegal activity,' further persecuting any attempts at expressing the Tibetan identity.

A report in the Tibet Daily identified a crackdown aimed at targeting both pornography and other ‘illegal activity’, specifically listing the 'Tibetan independence propaganda' as a main target in the buildup to the 19th Party Congress, taking place this fall.

According to the report, the effort has been launched in the Tibet Autonomous Region (TAR) in order to tighten security and ensure compliance to the Party state prior to the important Party meeting in Beijing, which could be held as early as October. The official report mentions that further actions will be taken to “prevent problematic information distributed by Dalai Clique and other Western hostile forces and track down online circulation of negative information, hyper-speculation and rumors.”

The measures include an intensification of supervision over 'all kinds of illegal cultural products,' a reference to increasing controls over music, publishing and printing. Strict measures are already in place across Tibet to eliminate any books or materials mentioning the Dalai Lama, who is specifically mentioned in the Tibet Daily article as a target. The report also refers to “the field of news media and publishing” in order to ensure no publication of “harmful political content.”

Tibetan singers, writers, and artists have been detained imprisoned for these references, but bans have also been applied to Tibetan songs and books without overt or obvious political content. The new ruling states that the Chinese authorities will “strengthen the supervision of music and dance entertainment programs” according to Tibet Daily.

The priority of political ‘stability’ was also underlined by the TAR regional leadership in its announcement of the selection of 29 Tibetan delegates from the TAR to the 19th Party Congress. TAR Party Secretary Wu Yingjie and other delegates were shown in the report apparently casting ballots, although selection is on the basis of seniority and political loyalty to the CCP.