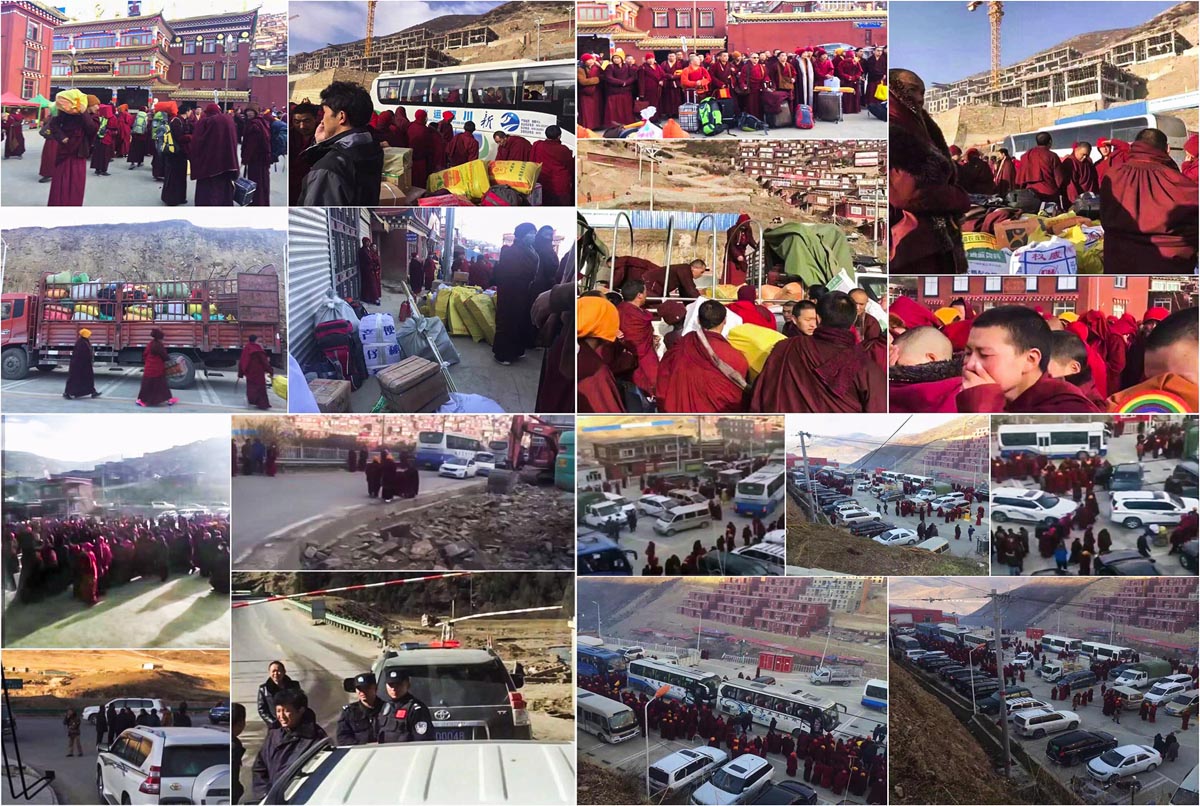 Dharamshala — New footages smuggled out from Tibet in recent days show scenes of monks and nuns being forced to leave Larung Gar Buddhist Institute. Monks and nuns have allegedly been forced to sign documents stating that they would not return to the globally renowned religious centre in Serthar (Chinese Seda) eastern Tibet (in present-day Sichuan province), where thousands of Tibetan and Chinese monastics have studied over the years.

The video footage shows more monks and nuns leaving by bus as others gather, many weeping, others with their hands joined in prayer, at Larung Gar, where the authorities started to demolish their homes in July. In one video, a nun appears to collapse by the roadside, screaming in distress.

According to sources, hundreds of monks and nuns from Golog (Chinese: Guoluo) and Jyegudo (Chinese: Yushu) in Qinghai, Ngaba (Chinese: Aba) in Sichuan, and the Tibet Autonomous Region were among those forced to leave Larung Gar in Kardze (Chinese: Ganzi) on Sunday (October 30). Officials and police arrived from their home areas to escort them.

Earlier footage from the institute in Kardze prefecture, Sichuan (part of the Tibetan area of Kham) depicted homes being razed by Chinese work teams with heavy equipment. Some of the new footage, most of which appears to have been shot during the expulsions on October 30th, shows cranes close to the main gate of Larung Gar, with newly-built construction on the hillside. These buildings are large concrete structures, strikingly different to the wooden huts that feature in much of the monastic community.

According to an anonymous source, the religious teachers at both Larung Gar and Yachen Gar “feel under intense pressure to comply with the official regulations – if they don’t convince the monks and nuns ordered to leave, there is an implicit threat to the ability to continue teachings there”. The same source said: “People are worried and disappointed that the nuns have to leave, particularly as many are in the middle of their education. Some have heard that they could come back once a week to take classes. But for those returning to the Tibet Autonomous Region, thousands of kilometers away, that would be impossible.”

Larung Gar is one of the largest centers of Tibetan Buddhist learning in Tibet, mostly inhabited by monks and nuns. Founded in 1980, the community is primarily focused on the study of Tibetan Buddhism – one of the largest such communities in the world. Demolition of the Larung Gar academy began in July as part of a multiyear plan aiming to downsize the academy by 50 percent and evict at least half of its more than 10,000 residents. Three nuns from the region have committed suicide in protest.