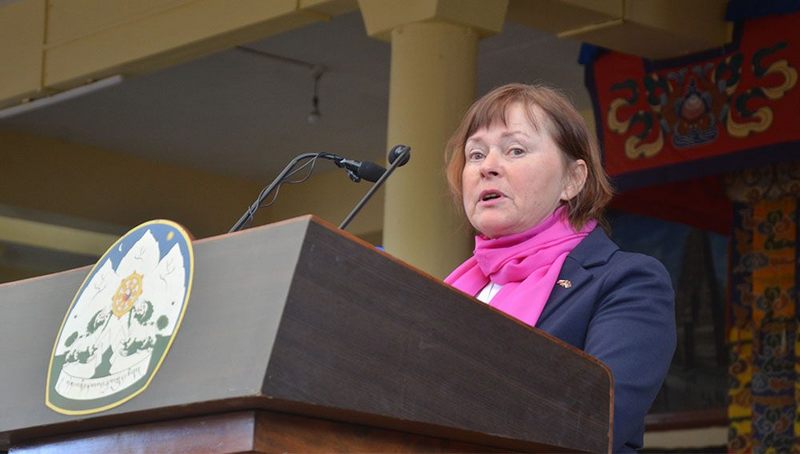 Dharamshala, India — 'The common bond between the Czech Republic and Tibet, that of colonial subjugation which the Czech had fought and had won their freedom in 1989,' Dana Balcarova, a founding member of the Czech Parliamentary Group for Tibet.

On the 61st Anniversary of Tibetan Uprising Day in Dharamshala, India, on March 10, 2020, Czech Balcarova has reaffirmed their strong support to the cause of Tibet She expressed her continued support to the Tibet issue and Tibetans would achieve their's similarly and expressed solidarity for Tibet.

His Holiness the Dalai Lama is admired across the world and it is the same in the Czech Republic as well,' she said, added that she shares with the former Czech President Vaclav Havel, their admiration and respect for His Holiness.

She further added the Czech Parliamentary committee of the environment of the chamber of deputies was in line with the Tibetan government on the issue of Tibet's environment.

'Tibet's environment has serious climate impacts on the neighbouring countries and the world due to Tibet's geolocation and as the "water table" of major rivers flowing through Asia,' she further added.

She noticed that the damage to the natural resources as well as the mining and other unsustainable practices could affect the sustenance of the neighbouring countries.

She stressed on the common bond between the Czech Republic and Tibet, that of colonial subjugation which the Czech had fought and had won their freedom in 1989. She expressed her hope and strong belief that Tibetans would achieve their's similarly and expressed solidarity for Tibet.

In a statement to mark the 61st Anniversary of the complete Control of Tibet by the People's Republic of China, the Czech Parliamentary group for Tibet said: "We, the members of the Czech Parliamentary Support Group for Tibet marking the 61st anniversary of the Tibetan National Uprising Day, declare our unrelenting support to the Central Tibetan Administration, Tibetan Parliament in exile and all Tibetan people living inside and outside of China occupied Tibet."

"The support group for Tibet in the Czech Parliament. having 53 members from S political groups in both chambers was reinstated - in October 2018 We commit ourselves in carrying the legacy of the first president of the Czech Republic, who has officially invited His Holiness the great 14th Dalai Lama to Prague in 1990, as the very first statesman It was ow pleasure to welcome President Dr Lobsang Sangay in the Chamber of Deputies and in the Senate of the Parliament of the Czech Republic as well as at Prague City Hall," it added.

"We appreciate our very close relationship and express our deep admiration to His Holiness the great 14th Dalai Lama for his dedication and life-long activities that continue to connect and inspire people across the world, and for being a strong advocate and sending his clear message in the area of human rights We hope ow extraordinary relationship will continue to deepen as we stand together in the pursuit of world-wide Justice and freedom," the statement concluded.