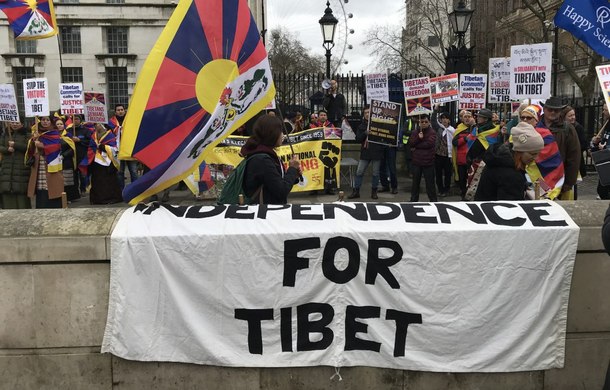 Over a hundred Tibetans and Tibet supporters marched through the streets of central London on March 10, 2020 to mark 61 years since the 1959 uprising and protest Beijing’s ongoing occupation of Tibet. Photo: TPI

London — Over a hundred Tibetans and Tibet supporters marched through the streets of central London yesterday to mark 61 years since the 1959 uprising and protest Beijing’s ongoing occupation of Tibet.

The London-based advocacy group Free Tibet said that "the protest began opposite Downing Street and finished outside the Chinese embassy". Protesters carried placards about ongoing human rights abuses in Tibet and chanted “Stop the killing in Tibet."

“It is with sadness that we commemorate sixty-one years… If this demonstration was happening in Lhasa, it wouldn’t last very long,” MP Tim Loughton said. ”Now we are joined by the oppression of the Uyghurs.

“This is such an important cause, and remember, you have many friends,” Loughton said.

On 10 March 1959, Tibetans in Lhasa rebelled in an uprising that was suppressed by China. Thousands of Tibetans died and many including the Dalai Lama fled across the border into exile.

Some of the Tibetans in the crowd said they came to speak for those who are still in Tibet and remind themselves of the Chinese occupation.

“We are not oppressed in the west much, but we have our brethren in Tibet who are not free and are voiceless… Even though we are compassionate, we still deserve our human rights,” said Tinlay Palden, a Tibetan at the London protest who lives in Toronto.

Palden said his grandparents wanted to die in Tibet but were unable to go back. Adding, his family used to call relatives in Tibet but have lost contact because of growing language barriers with more Tibetans inside the country now speaking Chinese.

“They [China] try to destroy our language and culture,” Palden said.

A second Tibetan protester, Tenzin Lhamo-Arroub said the anniversary was an important reminder for Tibetan exiles of their situation and issues which still exist in Tibet but can be forgotten about during daily life.

“I think it’s an important anniversary… to remind ourselves of the situation that we’re still in,” Lhamo-Arroub said. Adding she doesn’t believe Chinese rule in Tibet will change during her lifetime because of the power of Beijing.

10 March anniversary events also took place in cities around the world, including New York and Dharamshala.

The London protest finished outside the Chinese embassy where two UK police officers with automatic weapons stood between the protesters and the entrance of the building.

Tiananmen square survivor Shao Jiang and Uyghur Rahima Mahmut both spoke to the crowd opposite the embassy.

“I understand fully what the Tibetan people have been going through since the occupation because the Uyghur people have experienced the same terror,” Uyghur representative, Mahmut said. “2022 Olympics in Beijing. China has no right to host these games.”

Tiananmen square survivor, Shao Jiang spoke next, adding, “Human rights, freedom, and democracy are never granted. We have to fight for them together.”