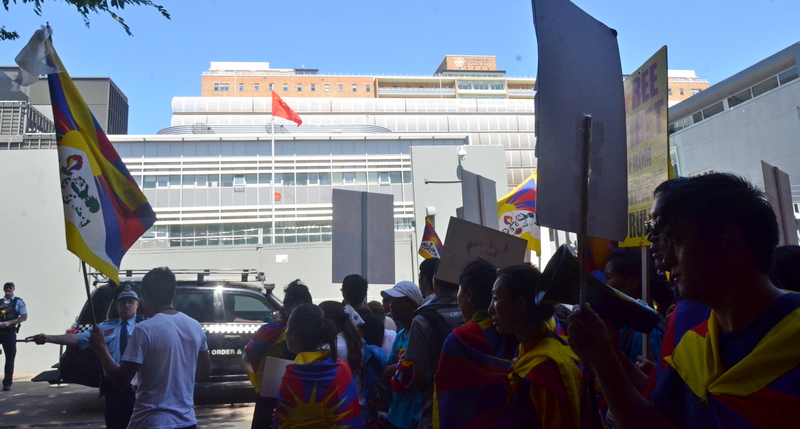 On March 10, 2019, Tibetans and supporters staging a protest in front of the Chinese consulate as they commemorate the 1959 national uprising day against China's military occupation of Tibet. Photo: TPI/Yeshe Choesang

Sydney — On March 10, 2019, the Tibetan community of NSW, Tibetan supporters and Chineser supporters of Tibet, came out in force to protest at the gates of the Chinese Consulate in Sydney, as thousands of other Tibetans and their supporters take to the streets across the world to mark the 60th anniversary of National Uprising Day of Tibet.

"There are no human rights in Tibet, no freedom in Tibet and no freedom of speech in Tibet. So Tibet is very controlled ... These days, China is destroying the Tibetan cultural identity,” said Tsundu Oser, President of the Regional Tibetan Youth Congress escaped across the Himalayan Mountains, into India.

On behalf of 3000 Tibetans who live in Sydney areas and the six million people of Tibet as well as our supporters across the world, we felt grateful that you all are joining us once again, this time comemorating the 60th anniversary of Tibetan National Uprising in the Captital of Tibet Lhasa, protesting against Chinese invasion of Tibet in 1959, he added.

Over hundred Tibetans and supporters participated in a peace march from Martin place in Wynyard to the office of the Chinese consulate in Sydney and this event was organised by the Regional Tibetan Youth Congress (RTYC) of NSW.

Tibetans and supporters initially sang the national anthem of Tibet at the beginning of a rally to mark the 60th anniversary of the March 10, 1959, Tibetan Uprising against China's illegal invasion of Tibet, started in 1949.

On March 10, 2019, the Tibetan community of NSW, Tibetan supporters and Chinese supporters of Tibet, came out in force to protest at the gates of the Chinese Consulate in Sydney, as thousands of other Tibetans and their supporters take to the streets across the world to mark the 60th anniversary of National Uprising Day of Tibet.

Demonstrators pass through Martin place in Wynyard on Sunday, March 10, 2019, shouting slogans such as, “Wake Up: UNO!” “Free Tibet!” “We want justice!” "Save Tibet," China out of Tibet", "Tibet is not part of China,” “We want freedom." "Human Rights in Tibet" and "Press freedom in Tibet," while passing out pamphlets on the history of Tibetan National Uprising Day.

March 10 is the 60th anniversary of an abortive 1959 uprising against Chinese resppresive rule in Tibet. Similar rallies were held in Taipei, New Delhi, Paris, Canberra, London, Berlin, Rome and hundreds of other cities in Europe, USA, South America, Africa and Japan, with organisers estimated that tens of thousands of protesters and supporters attended the worldwide rallies.