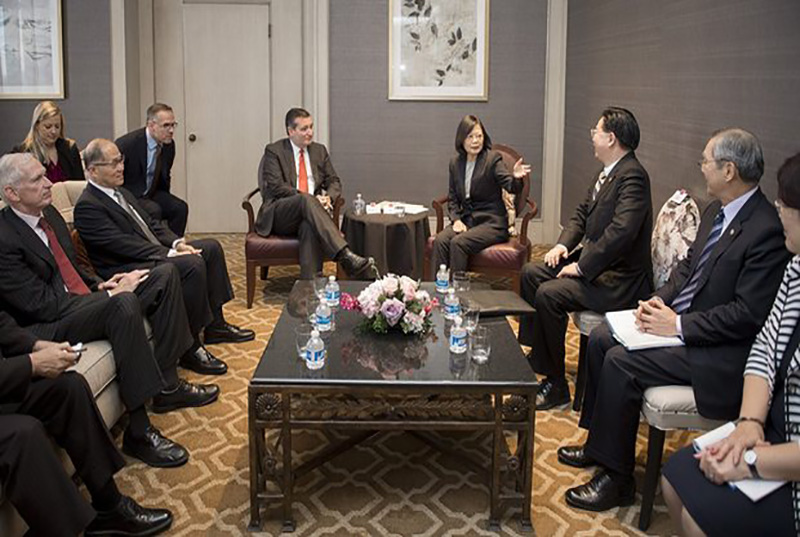 Dharamshala —  Texas Senator Ted Cruz along with the Texan Governor, Greg Abbott, met with the Taiwanese president, Tsai Ing-wen, while she was passing through the state on her way to diplomatic engagements in Central America on Monday, January 9th, much to the chagrin of the Chinese.

Cruz said he had received what he called a 'curious letter' from the Chinese consulate, asking that the Houston congressional delegation “uphold the ‘One China policy’” and not meet the Taiwanese leader.

Chinese Consul General Li Qiangmin of Houston wrote to Cruz and the delegation, “For U.S. leaders in administration and legislature, not to make any contact with Taiwan leaders nor send any implication of support of ‘Taiwan Independence’ are in the interests of China, the U.S. and the international community. So, dear Senator, I sincerely hope that you will neither meet, nor have any contact with Tsai during her upcoming visit to Houston, and continue to play a significant role in promoting mutual understanding and friendship between the two peoples of China and the U.S.”

In his letter, Li called the “Taiwan issue” the most sensitive one in Chinese-U. S. relations and acknowledged that it had been in the news media lately. Tensions regarding U.S.-Chinese-Taiwanese relations have been high since early December, when President-elect Donald Trump accepted a phone call from Tsai, breaking with nearly four decades of protocol in speaking directly with the Taiwanese leader.

In response, Senator Cruz responded in a statement on Sunday, saying, “The People’s Republic of China needs to understand that in America we make decisions about meeting with visitors for ourselves.

“This is not about the PRC [People’s Republic of China]. This is about the US relationship with Taiwan, an ally we are legally bound to defend. The Chinese do not give us veto power over those with whom they meet. We will continue to meet with anyone, including the Taiwanese, as we see fit.”

The “One China” policy, has dictated relations between the United States and China, and has carried over to the issue of Tibet, as U.S. officials have acknowledged Chinese claim over Tibet, much like Washington acknowledges that Beijing claims Taiwan, and the Communist Party of China has vowed to retake Taiwan, a democracy, by force if necessary.