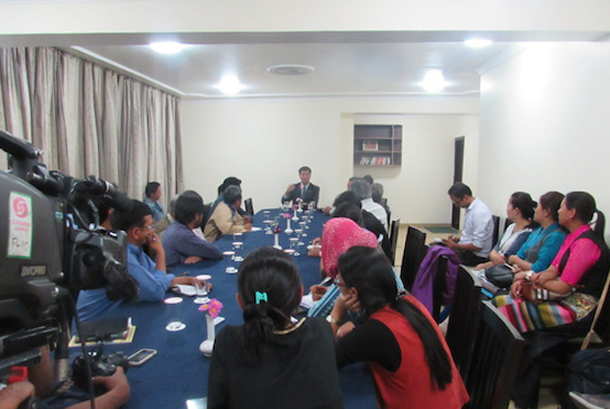 Leh, Ladakh — “Tibet is not a problem for China, it is rather a solution for the whole of Asia,” Sikyong Dr. Lobsang Sangay stated this week at a conference hosted by Ladakh International Centre in Leh.

In his keynote address, the democratically elected political leader of the Tibetan people highlighted the environmental issues facing Tibet and the future impacts on Asia, quoting that Tibet is the source of ten major rivers in Asia. Forty percent of fresh water in the Indus River comes from glaciers in Tibet, and he added that the Yangtze River and Yellow River in China as well as the Mekong River in Vietnam, and the Brahmaputra River in India and Bangladesh all originate from Tibet.

Today, when billions of people are facing scarcity of fresh water, he suggested, that Tibet, known as the third pole, is actually a lifeline for Asia. Adding that Tibet is known as the third pole due to the huge ice reserves that, unlike the north and south pole whose ice reserve melts into oceans, Tibet’s ice melts and channels into fresh water across the Asian countries.

Putting Tibet’s vast water resources into a current context, Sikyong said, “in ancient times, people fought over land, and in recent times it is over oil and soon there will be a time when they battle over water.”

The current environmental exploitation of the Tibetan plateau consists of Chinese construction of buildings and dams, deforestation, rigorous mining, all of which has affected the ecological system of Tibet, and is a threat to the future of its neighboring countries.

Expressing his grieving concern over this environmental destruction, he said, “a recent scientific study, which tells that the global warming in Tibet is double the percentage than rest of the world.”

“Addressing the Tibet issue is not merely about Tibet but for the whole of Asia especially the Indian sub-continent. Tibet should not be looked simply as a problem of China, it should be viewed as a solution for Asia’s water woes,” Sikyong concluded.