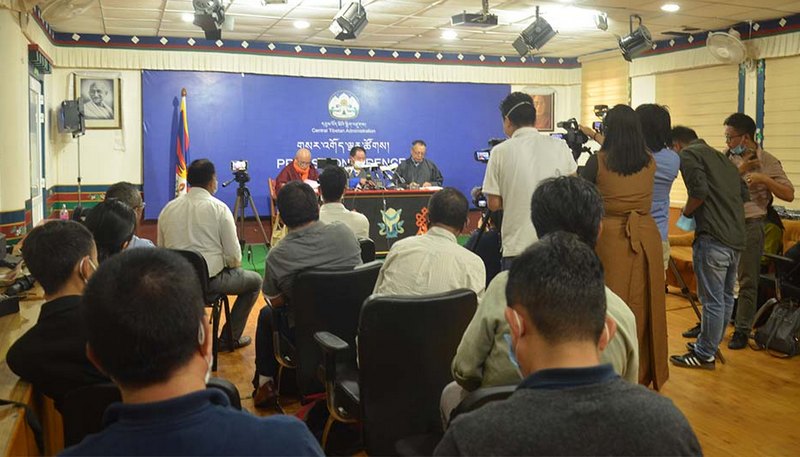 Dharamshala, India — The 10th session of the 16th Tibetan Parliament-in-exile scheduled to take place from September 16-24, 2020 has been postponed until March 2021.

The decision came during the 327th Standing Committee meeting, on August 13, 2020, and the reason precisely because of "the rising urgency situation across the world caused by Covid-19 which originated in Wuhan in China."

The postponement of the parliamentary session was in accordance with the Article 6 and clause 2 of Article 49 of the Charter of Tibetans in exile, the Speaker of Tibetan Parliament-in-Exile (TPiE) Pema Jungney told members of media during a press conference, held in Dharamshala, India, on Monday, August 17, 2020.

“The 10th session of the 16th TPiE scheduled to be held for 8 days from 16-24 September 2020, will be postponed until March 2021 as per the decision taken at the 327th Standing Committee meeting on 13 August 2020, in accordance with the Article 6 and clause 2 of Article 49 of the Charter of Tibetans in exile,” said Speaker Pema Jungney who was accompanied by his Deputy Speaker Acharya Yeshi Phuntsok and Parliamentary Secretary Tsewang Ngodhup.

“This decision has been taken considering the rising urgency situation across the world caused by COVID-19 which originated in Wuhan, China. We were bound to take this decision as we have to take responsibility especially when His Holiness the Dalai Lama resides here in Dharamsala. And even if the session is held supposedly, because of the current international travel ban, Tibetan MPs from outside of India will not be able to attend the session and Tibetan MPs in India too might find it difficult to travel with the ongoing pandemic,” the Speaker added.

“Even though the September session shall not be convened, matters and proceedings related to the Parliament will execute without any negligence," they said, adding: "As usual, the annual reports of the Central Tibetan Administration's main offices as well as of institutions under it for the fiscal year, 2019-2020 is being reviewed by the Standing Committee and questions raised on the annual reports by members of the Committee will be submitted to the respective departments through the Kashag Secretariat.”

“Clarifications by the Administration to the questions raised on the reports should be submitted to the Parliamentary Secretariat before 31 October. The questions raised and the clarifications provided for the annual and its précis reports of the Central Tibetan Administration's main departmental offices as well as of institutions under it will be available on the official website of the Parliament for the information of the general public,” the Speaker concluded.