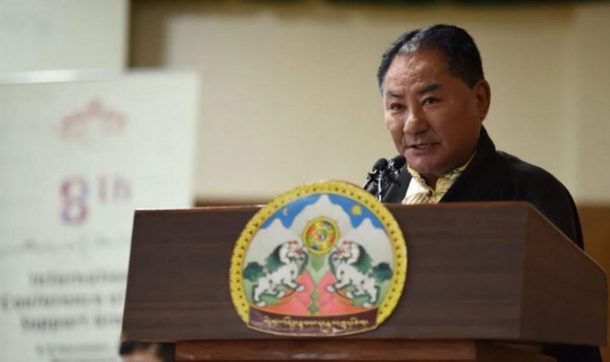 Dharamshala, India – Speaker of the Tibetan Parliament-in-Exile Pema Jungney on behalf of Tibetans in and outside of Tibet expressed his heartiest gratitude to the US House and it’s each one of high officers for passing the Tibetan Policy and support Act 2019 with overwhelming votes in the house.

"The United States has also adopted numerous resolutions in support of the human rights violation and religious freedom of Tibetans in Tibet especially referring to the right to identify the reincarnation of Lamas without the interference of Chinese authorities. Most importantly, the adoption of the US Tibetan Resettlement Project, U.S.Tibet Policy Act 2002, and the adoption of Reciprocal Access to Tibet Act in 2018 has made tremendous contributions to our cause,” he added.

“We are truly grateful to your government for receiving and hosting His Holiness the Dalai Lama, the icon of global peace and compassion many times in the US and conferring the Congressional Gold Medal, the highest civilian award to His Holiness the 14th Dalai Lama in 2007,” the Speaker wrote.

He further said, “Passing this bill in the house with supermajority marks the victory of Truth and Justice and condemns Violation of Human rights. The supermajority vote on the legislation also proves support by the US for the Central Tibetan Administration, the Middle Way Policy and genuine autonomy for Tibetans, religious freedom, environmental protection of Tibetan plateau and restoration of freedom in Tibet. This brings great hope and light to all the Tibetans. We are indeed very thankful and indebted to you.”

“It is a historic moment for Tibetans, especially for Tibetans inside Tibet whose voiceless voices have been heeded and above that, it sends a strong message of hope to those who are still suffering under China’s repressive policies.”

“I would also like to thank Hon. Speaker Nancy Pelosi for your staunch support towards our cause throughout the time and tabling it yet again in the house and shedding light on the critical situation of Human Rights in Tibet and Right to Religious freedom emphasising on the exclusive right to choose the next Dalai Lama by the Tibetans,” the Speaker said.

“Putting Human Rights Concerns over the commercial relationship between the US and China has earned greater respect and trust by us Tibetans and the world.”

Speaker concluded the letter writing, “We are hopeful that the bill will be passaged smoothly through Senate and President to become a law, marking it a historic act for Tibet and most importantly we hope the law will be implemented efficiently after the enactment of the bill as a law. Once again I would like to express my deepest gratitude to the members of the US House of Representatives for passing the Tibetan Policy and Support Act (HR 4331) with an overwhelming majority of the votes.”