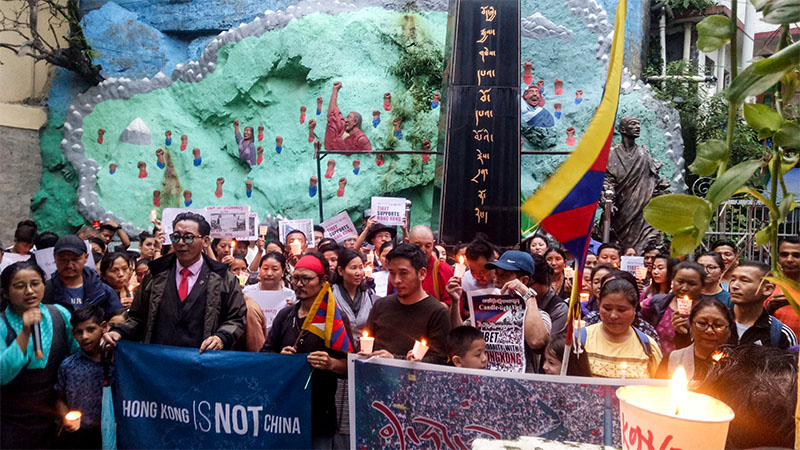 Tibetans and supporters holding a a candlelight vigil in solidarity with Hong Kongers at the Martyr’s Pillar in McLeod Ganj, India during the evening on August 19, 2019. Photo: TPI/Yangchen Dolma

Dharamshala, India — Tibetans in-Exile in Dharamshala, India held a candlelight vigil in solidarity with the people of Hong Kong for their fight for justice, freedom, democracy and rights to self-determination. Marchers strongly urged all peace-loving countries and people, as well as those people who stayed absolutely silent on the issue to condemn the atrocities inflicted upon the non-violent protests in Hong Kong.

Gu-Chu-Sum Movement Association of Tibet, an organisation of the former Tibetan political prisoners based in Dharamshala, India has initiated this candlelight vigil to stand with the people of Hong Kong. Around one hundred Tibetans and foreign supporters joined the event which started at 6 pm, on August 19, 2019, Dharamshala, India. The candlelight vigil started from the main square to the Martyr’s Pillar, near the main Tibetan temple by marching with banners and placards that read, “ Free Hong Kong” “Hong Kong is not China”, “Tibet stands with Hong Kong”, Tibet support Hong Kong."

Namgyal Dolkar Lhagyari, the President of the Gu-Chu-Sum, said "we should support people of Hong Kong, who are fighting for their freedom, democracy and we have many things can learn from the protesters about the power of non-violent resistance."

A statement released by the organiser said that “since the handover of Hong Kong to China in 1997 after the Sino-British Joint Declaration which was signed on 19 December 1984, the citizens of Hong Kong have seen a gradual degradation of their basic human rights under the mainland Chinese government. However, the ongoing protests and confrontations that ensued for more than ten weeks have plunged Hong Kong into its worst crisis since it reverted from British to Chinese rule and the biggest popular challenge to Chinese President Xi Jinping since he came to power in 2012”.

“The Basic Law of the Sino-British Joint Declaration states that Hong Kong shall safeguard the rights and freedoms of the residents for 50 years after the handover. In accordance with the One country, two systems" principle agreed between British and China, Hong Kong previous capitalist system and its democratic governance would remain unchanged until 2047” the statement said.

It also said that “but after the introduction of the recently-shelved extradition bill that allows people from Hong Kong to be detained and extradited to mainland China, many residents see mainland China already starting to encroach on those rights and undermine the independent judicial system of Hong Kong. This perceived threat to Hong Kong's rule of law has led to a series of non-violent protest since March 31, 2019, and regular confrontations between police and protesters”.

The statement continued that “many who were largely apathetic about the original issues are furious at brutal policing and official intransigence on the protesting Hong Kong youth leading thousands of civil servant finance workers, lawyers, teachers, and construction workers to join the protests. Tear gas has frequently been used by police in attempts to disperse protests across the city and hundreds of protestors were arrested and likened them to “terrorists”. Yesterday according to the organizers, more than 1.7 million joined the pro-democracy rally against the police use of force and chanted slogans like "Power to the people: stand with Hong Kong" in Hong Kong's streets”.

“Today Gu-Chu-Sum Movement Association of Tibet, an organisation of former The Political Prisoners in India has initiated this candlelight vigil to stand with the people of Hong Kong their fight for justice and right to self-determination. We stand with nations and world leaders across the world that called on China for a peaceful solution to the protests and respect the rights of the People of Hong Kong. We urge leaders and nations who are silent on the issue to condemn the atrocities inflicted upon the non-violent protests Hong Kong” it added.