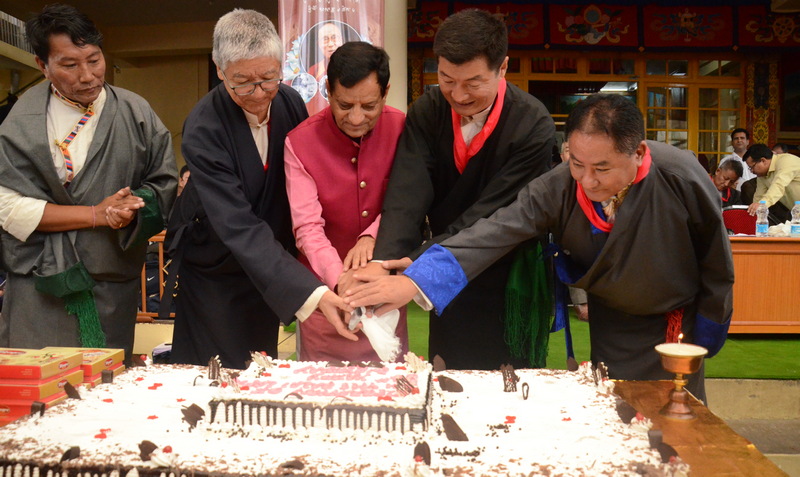 The Tibetan government in-Exile released a statement celebrating the 84th birthday of the Dalai Lama saying, "We Tibetans are eternally grateful to the lineage of the Dalai Lamas and ever more so to His Holiness the 14th Dalai Lama for being our ray of hope and our source of strength in our times of darkness".

His Holiness the 14th Dalai Lama Tenzin Gyatso turned 84 today amidst an outpour of sentiments of gratitude; fervent prayers for his long, active life; and for his practical teachings on embodying values of warmheartedness, compassion, understanding, and forgiveness as pillars of world peace to continue to flourish.

The courtyard of the main Tibetan temple brimmed with spirits of celebration and festivity and gratitude as thousands came together celebrate the momentous birth-anniversary of the world peace icon and Tibet’s most revered spiritual and moral leader, His Holiness the 14th Dalai Lama.

Heads of the three pillars of Tibetan democracy as well as heads of autonomous offices of Central Tibetan Administration, an illustrious delegate of former leaders and officials, include Ama Jetsun Pema and other Yabshi family members were among the Tibetan dignitaries at the event.

Member of Indian Parliament and former Minister of State for Industries and Transport Kishan Kapoor was the chief guest at the official function, offered heartfelt greetings on behalf of the people of Himachal Pradesh and particularly expressed gratitude to His Holiness for making Dharamshala one of the most well-known destinations for peace and tranquillity in the world.

The Indian MP called His Holiness the foremost moral and spiritual leader in the world today. He paid tributes to His Holiness the Dalai Lama’s lifelong efforts to bring peace in the world and also paused to applaud the successful leadership of Central Tibetan Administration in keeping intact the unique identity, culture, history and the practice of Tibetan Buddhist tradition in exile.

The President Dr Lobsang Sangay said in his remarks, “His Holiness has always spoken of the special historic and karmic relationship shared between the Dalai Lamas and the Tibetan people. We Tibetans are eternally grateful to the lineage of the Dalai Lamas and ever more so to His Holiness the Fourteenth Dalai Lama for being our ray of hope and our source of strength in our times of darkness.

“Based on His Holiness’ vision and advice, today in India and in 37 countries, changes are being initiated and brought in the curriculums emphasizing on educating the heart. In order to secure a more peaceful world in the 21st Century, His Holiness trusted that the younger generation, who will be the leaders of tomorrow, be trained in such an education system.”

The President also noted that this year is also the obstacle-year of His Holiness and, therefore, he said it is of prime importance that we all indulge in meritorious deed and enrich our collective karma for the pacification of obstacles if there is any. “In addition, we should always remember and follow the counsels of His Holiness.”

Speaker Pema Jungney, Tibetan Parliament-in-Exile remarked, “His Holiness the Dalai Lama’s four commitments in this life has been of infinite benefit to all sentient beings and his kindness and compassion can never be repaid. Therefore, it is of utmost importance that we the Central Tibetan Administration, the non-governmental organisations, as well as the general public, commit ourselves to be dedicated disciples of his four commitments.”

“The accomplishments of His Holiness the Dalai Lama in carrying out those four commitments have earned him hundreds of awards and prizes, including the globally renowned Nobel Peace Prize in 1989, the United States Congressional Gold Medal in 2007, and the John Templeton Award in the United Kingdom in 2012.”

“At the same time, it bears emphasizing that at this critical moment in the history of Tibet, the entirety of the Tibetan people should commit themselves to an oath of unity with the commonality of purpose and be unequivocal in carrying out the profound wishes of His Holiness the Dalai Lama. We should act in every possible way to ensure that His Holiness the Dalai Lama is comforted to see his wishes being sought to be fulfilled with utmost sincerity by all of us."

"Since this year is an obstacle year for His Holiness the Dalai Lama, all the Tibetan people in Tibet and in exile, have already been fully immersed in accumulating enormous recitations of prayers for His Holiness as solemnly prophesied and instructed by the deities and lamas. We only wish to request everyone to make sure that there is no slacking of effort and commitment in this undertaking,” the Speaker added.

Also on the occasion, President Dr Lobsang Sangay felicitated ten scholars on completion of the 1st Research Programme on Buddhist Studies and two distinctive CTA officials, Chief Justice Commissioner felicitated two Tibetan PhD scholars, Speaker of Tibetan Parliament presented certificates of appreciation to eight senior staff who have served the Central Tibetan Administration for 25 years and the Chief Guest Shri Kishan Kapoor released a book of compilation of His Holiness the Dalai Lama’s 10 March statement from 1960-2011 translated from Tibetan into Chinese by China Desk of the Department of Information and International Relations.