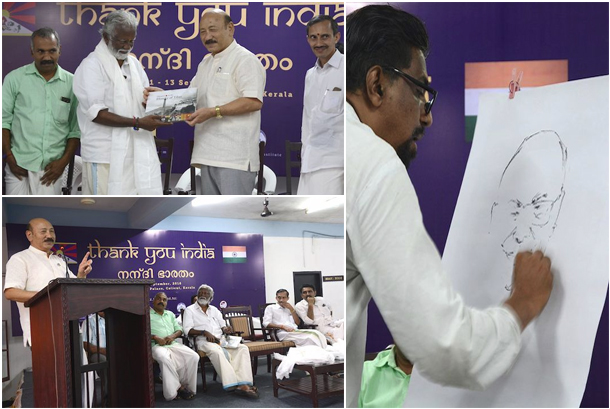 Dharamshala — Kerala State BJP leader Tuesday called on the Chinese government to end the ongoing cultural genocide in Tibet and expressed his strong support for the Tibetan struggle.

As the Thank you India program was about to end in Kozhikode, leader of BJP Kerala State - put into words their immense support and solidarity for the Tibetan people and their plight in their own homeland in the hands of China.

The BJP President Kumannam Rajasekharan spoke highly of His Holiness the Dalai Lama and mentioned that the latter has been awarded and honored worldwide due to his important role in non-violence, world peace, empathy and cooperation between people following different religions. “The Tibetan nation has been deprived of its rightful freedom and dignity for half a century" he said.

According to Mr RK Khimrey (the National Convener of Core Group for the Tibetan Cause from India) – since China has occupied Tibet, the Tibetan struggle has become important for India as well as it often becomes a conflict of interest between India and China.

Mr Rajasekharan also pledged to raise Tibet issue at the highest levels with the Indian leaders. "I am here to express wholehearted support and respect for the Tibetan culture, religion and the peaceful resilience which have been so brutally crushed by the Chinese government,” he said.

The conflict revolving around the Indo-China border still persists today because ironically there is no existence of such a border. At the end of his talk, Mr Khimrey urged all Indians to examine the historical correspondence between India and Tibet and support the Tibetan people in their freedom struggle.

The Central Tibetan Administration brought about the Thank You India program in five significant Indian cities (Nagpur, Calicut, Sonipat, Chennai and Puducherry) to show their appreciation for the steady support and encouragement from the Indians. Apart from the talk, there was a unique photo exhibition, showing of a documentary film, Tibetan Medical and Astro Institute's free of charge medical camp, ethnic performances done by Bangalore's college students and discussions on Tibet's part in the Indo-Sino relations by specialists.