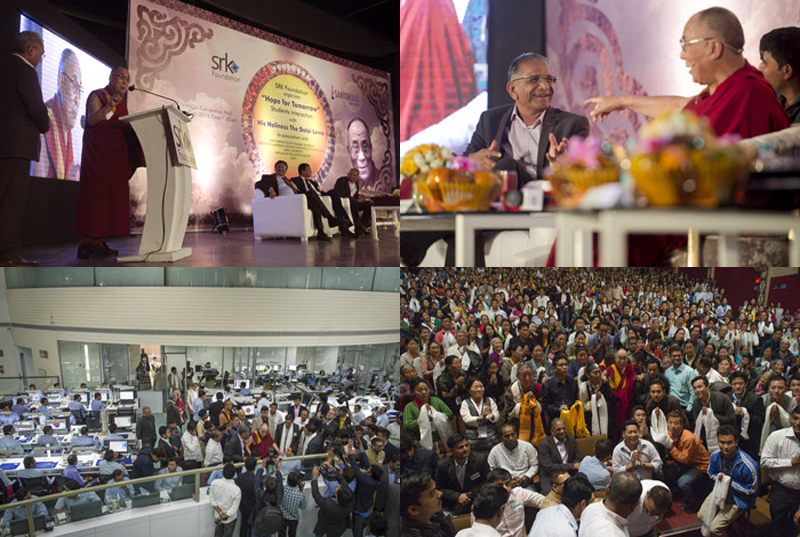 Surat, Gujarat: - “Without technology humanity has no future, but we have to be careful that we don’t become so mechanised that we lose our human feelings,” His Holiness the Dalai Lama said at an event in Surat, Gujarat, India, on January 1, 2015.

The spiritual leader of Tibet was the guest of Govind Dholakia a successful entrepreneur in the diamond business.

Mr Dholakia showed him around his company’s environmentally friendly building where they process diamonds with state of the art technology. He told the story of leaving his farming family at the age of thirteen to work as a diamond cutter.

Dholakia attributes his success to his having learned from his guru Shree Dhongreji Maharaj the value of treating others with respect. He discovered that as a result, others are cooperative and respectful to you in return and he regards those who work for his company as members of his family.

His Holiness replied that his approach reminded him of companies in Japan where a key to success is the respect and equality that exists between workers and management. He observed:

“Without technology humanity has no future, but we have to be careful that we don’t become so mechanised that we lose our human feelings.”

His Holiness visited the various stages of the diamond process and talked to people working in it before joining them for lunch in the staff dining room.

In the afternoon, His Holiness addressed more than 4000 people at the Veer Narmad South Gujarat University Convention Hall.

“Dear elder brothers and sisters, I am indeed very happy to have this opportunity to interact here with you young people. There are two reasons. The first is that I am now an old person and relating with young people makes me feel younger too. When I’m with older people, I find myself wondering who’s due to go first, me or you?

“The second reason is that the past is past. We can learn from it, but we can’t change it. The future hasn’t yet come; it’s open. What will happen is not guaranteed. It is in our power to change it, but to do so we need to have vision, to take a long term perspective and we have to work hard.

His Holiness added that those of you who are young today belong to the generation of the 21st century. If you are going to fulfil a vision for a happier, more peaceful future in this world, you need to learn to live each day in a more meaningful way. You need to sharpen your human intelligence through study, but you also need to develop a warm heart.”

He reiterated the importance of developing a wider perspective and a more holistic view. He said that to see reality clearly we need to look at it from more than one angle. We live at a time when the world population continues to increase while the threats of climate change continue to grow.

These are issues His Holiness said that affect the whole of humanity but he’s found warm-heartedness to be a source of inner strength and self-confidence. It helps you keep up your enthusiasm and live in an honest, transparent way.

His Holiness referred to the wisdom to be found in ancient Indian knowledge. On the one hand he cited the great Indian physicist Raja Ramanna’s telling him of his excitement and pride in finding ideas in the writings of Nagarjuna that pre-empted the contemporary findings of quantum physics.

On the other, His Holiness extolled the wealth of knowledge about the workings of our mind and emotions in ancient Indian psychology, knowledge that can be of great value today. He also praised India’s centuries’ old traditions of "Ahimsa," non-violence, and secularism.

He told his listeners that belonging to the most populous democratic country, young Indians today should look to see how they can contribute not only to India, but to the world as a whole.

“Many of the problems we face today are entirely manmade. Therefore solutions must be within our grasp too. But it’s crucial we take account of the whole of humanity.”

Among questions he was asked, the first was about the real value of religion. His Holiness replied:

“All the major religious traditions convey a message of love, tolerance, simplicity and self-discipline. They are helpful to humanity. It’s up to you whether you want to follow a religious tradition. But if you do, the important thing is to do so sincerely. What is clear is that all human beings need affection and in our education today we need to find ways to promote human values in ways that take everyone into account."

"We need to adopt a secular approach based on our common experience of affection, common sense and scientific findings. Added to this we need to understand how our mind and emotions work,” His Holiness added.

Another student asked if His Holiness felt his wisdom derived directly from the teachings of the Buddha or from his own experience. He told him that the Buddha had encouraged his followers not to accept what he said at mere face value, but to examine, investigate and analyse it. His Holiness said he had followed great masters like Nagarjuna in doing just that.

Finally, a young woman asked if he had any advice for female students today. In his answer he talked about human history, of how long ago people lived in small groups with no idea of leadership, just sharing what they had with each other. However, with the development of agriculture, property and the need to protect it a need for leadership arose.

At that time there was no education and the criterion for leadership was physical strength. This is how male dominance came about. His Holiness said that 'the emergence of education has restored some sense of equality between men and women. But education alone is not sufficient. At a time when it is important to promote a wider sense of love and compassion, science has produced evidence that women are more sensitive to others’ needs and pain. Therefore, we need women to take greater responsibility for leadership. And where there is inequality we should work to correct it.