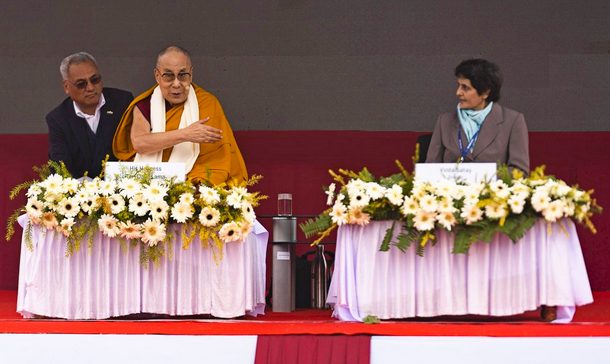 Dr Vinita Sahay, Director of IIM Bodhgaya, thanking His Holiness for his talk at the Indian Institute of Management in Bodhgaya, Bihar, India on January 14, 2020. Photo by Lobsang Tsering

Bodhgaya, India — Prayers alone will not achieve genuine world peace and harmony, therefore, there is a need to make an effort to reduce violence, states the Tibetan spiritual leader while addressing the audiences at the Indian Institute of Management (IIM) in the Bihar State of India, on January 14, 2020.

This is not the first time the Buddhist monk has expressed his concerns about the world problems caused by humans' violent behaviors or actions. In April 2016 he tweeted: "The time has come for us to consider seriously how to change our way of life not through prayer or religious teaching alone, but through education.

Over 180 students, plus faculty members and invited guests were presented. At the start of the event Dr Vinita Sahay the director of IIM and her co-workers invites His Holiness to plant a sapling to commemorate his visit to the institute.

In her opening speech, Dr Vinita gives an introduction about the institute and how IIM of Bodhgaya is trying to produce pool of managerial talents which will be needed particularly when India is emerging as an important global player today. She also recounts His Holiness the 14th Dalai Lama as a messenger of peace, nonviolent, compassion and universal responsibility. The religious figure of Tibet is an example of warm-heartedness, forgiveness, and tolerance describes Dr Vinita. She also mentions that IIM Bodhgaya is extremely pleased to have His Holiness address the young minds on the ancient Indian wisdom.

The Nobel peace prize laureate expressed that he is very happy to share some of his experiences with the audiences. He explains how every people in the world being the same human beings who want to live without suffering. But many of the problems the world face today is man’s own creation because of short-sightedness and narrow mindedness, he adds. Humans are social animals and every individual’s future is dependent on others so it is only natural to be concerned about others, emphasizes the 14th Dalai Lama.

In this modern world, technology has brought humans closer but individuals tend to see each in terms of ‘us’ and ‘them’ despite all belonging to one human community, the Tibetan religious head stressed.

21st century is known as a century of incomparable communication but humans still inclined to think that force is the ultimate solution for any problem and it is an error, he points out. There are conflicts in the Middle East and there are many poor people in the world who need support but huge amount money is spent on mass weapons and it is very saddening, depicts His Holiness.

Genuine world peace and harmony will not be achieved by brute force, he clarifies. The huge gap between have and have-nots could be reduced if fewer amounts are spent on arms which are devices of destruction, he simplifies. Although people talk about peace across the world, peace will not be achieved by praying and there is need to make an effort to reduce violence and use of arms, he remarked.

He also calls out that there is a need to learn from Gandhi-ji’s use of non-violence. Conflicts must be solved through dialogue, taking a non-violent approach and that is India’s longstanding tradition, says the 85-year old Tibetan religious leader.

The spiritual leader of Tibet referred to great thinkers of the past such as Mahavira and Buddha Shakyamuni upheld India’s ancient traditions of Ahimsa and Karuna and saying "these qualities are very relevant in today’s world".

His Holiness praised India saying "India is the only nation that could combine modern education which is greatly aligned towards material goals and ancient wisdom of Ahimsa and Karuna that focused on the ancient understanding of mind and emotions." The more compassionate one is the more self-confident and transparent one’s life will be, he declared.

India’s tradition of cultivating a calmly abiding mind (shamatha) and insight into reality (vipashyana) have produced many great thinkers, says the Tibetan religious head. He continued: "In today’s world one’s conduct needs to be guided by non-violence and motivated by compassion, he added. "Because ancient Indian philosophy and psychology is oriented with reason and logic, there is the resonance with physics, in particular to quantum physics, today. This approach, shown by the Nalanda Tradition, is being kept alive in Tibetan seats of learning re-established in South India, utters the symbol of world peace."

This is followed by an insightful interaction with the students in a question and answer session. Before he leaves the stage, he advises the students that if they could revive Indian ancient knowledge in India first, they can set an example in bringing peace in the world.