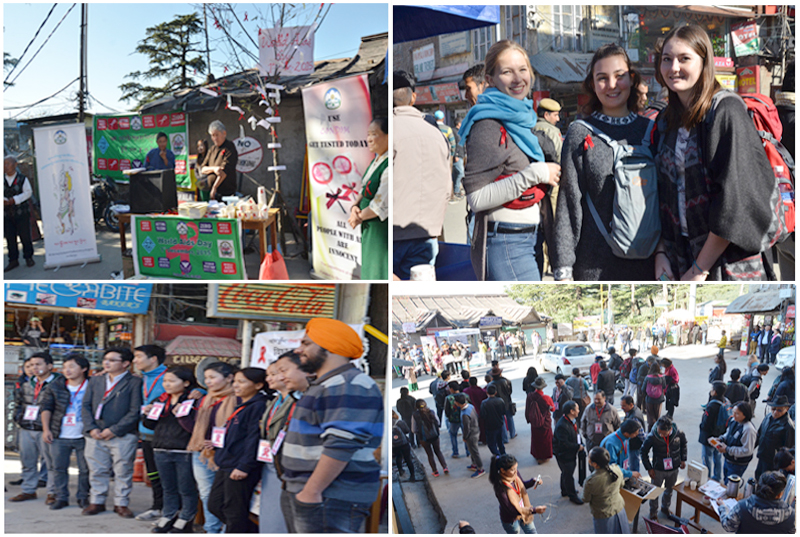 The events constituted of activities like groups songs and a street play by the volunteers. A Tibetan song commenced the ceremony. "It was themed around 'staying' alive", Simon, one of the British volunteers at LHA jokingly remarked. Over hundred Tibetans, foreign tourists and Indians attended the event.

The street play employed elements of theatre and an impactful script that caught the attention of many bystanders. It began with a son-father duo, who were portraying HIV viruses. The story proceeded to an informative speech by the condom-man who enumerated the causes and preventive measures of HIV-AIDS. The play ended with the condom man dramatically destroying the virus duo.

The play was followed by a procession led by the Director and Health and Environment In-charge at LHA, marching while chanting slogans on AIDS prevention. After the march reverted at the square, free condoms were distributed and tea was made available.

"Every year we hold such awareness programs. Although with every succeeding event, the scale on which it is organized is upped. Last year it was only a ribbon wearing ceremony. This is definitely effective in increasing public knowledge on such imperative issues, that which are not talked about due to social stigmas. We also take these awareness activities to schools and students as well", said Demay Tsering, Health and Environment In-charge at LHA.

"Many communities have fallen prey to this disease. 36 million people are dead due to it, 36 million living ones are fighting it in a daily battle. Every day, 75000 people contract it, 55000 die. The horrendous disease it is, the victim suffers not only because of its ill and perishing effects, but also due to the repulsive approach to discuss it in a social construct. India and China are big nations with brimming population and are vulnerable to it.

Tibetans are a small community though. 100 Tibetans in exile have contracted it and 16 have passed away. It is high time we talk about it. This is the purpose of this event", said Nagawang Rabgyal, Director, LHA.

From 11 a.m., free blood tests to check for AIDS were taking place at the Delek Hospital. Dr Dasel Delek delivered a speech on the issue and addressed audience concerns. Around 2:30, the performers and organizers presented the same program for the employees of the Tibetan Government in Exile near the Delek Hospital.

Simultaneously the Central Tibetan Government and Kunphen organization commemorated the World AIDS Day in a joint event. Kunphen organizes various workshops that focus on addiction and how to avoid it. In these seminars HIV/AIDS is addressed because of the transmission risk by intravenous drug use. "During one field trip, we encountered a young boy that told us that his father made his elder sister and he read our HIV/AIDS pamphlets. He said, '...since my father feels uncomfortable to talk about sex with my sister and he is concerned about her, he gave me your pamphlets and asked her to read it once and keep it safe for future references'", shared a member of the organization.

"I am honored to inform you all that the Department of Health of the Central Tibetan Administration has formalized a partnership with Teach AIDS to develop a special animated HIV education material in our own Tibetan language that is respectful of our Tibetan culture and custom. I have admired their materials and leadership for years and I am immensely pleased to inform that this special Teach AIDS educational animation will be made available free of cost in Tibetan language to everyone.

The Department of Health would like to thank Teach AIDS and the many volunteers we had for their significant contribution in developing this creative venture that is bound to help Tibetan communities everywhere in the world", said Kalon Dr Tsering Wangchuk, current minister of health, Tibetan Government in Exile. He also expressed his gratitude towards Dr Tsetan Dorji Sadutshang and Phurbu T Namgyal for their contribution and cooperation in donating their time and voices for the cause.