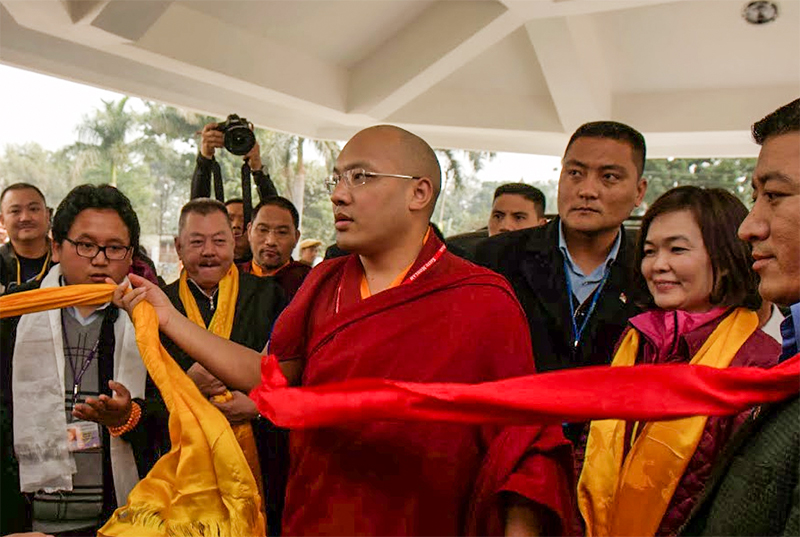 For that reason, the Karmapa said, he "hopes and pray that in the future the Kagyu Monlam will do more programs to help the public."

"Following its successful medical camp for the needy held in Bodhgaya, Bihar, the Kagyupa International Monlam Trust is now opening an animal medical camp, as part of the health support offered to the local community," Karmapa Office of Administration said in press statement released on Friday, adding: "The Karmapa Rinpoche will formally inaugurate the animal camp on 24th January 2014, with Smt. Maneka Sanjay Gandhi as chief guest. Member of Parliament Smt. Maneka Sanjay Gandhi is well-known for her deep commitment to animal rights and animal protection."

"Inspired by His Holiness the 17th Karmapa, the Kagyupa International Monlam Trust has committed to a multi-year animal health-care project, involving annual camps for treatment of all animals, sterilization of dogs and anti-rabies vaccination. With a nationwide street dog population estimated at 35 million dogs and 20,000 human deaths per year from rabies transmitted by dog bites, the World Health Organization's (WHO) recommends dog Animal Birth Control and Anti Rabies programs (ABC-AR) to control rabies in people," the Karmapa Office of Administration told The Tibet Post International.

According to the press release, the animal health camp is being initiated this year in support of the Government of India's active promotion of ABC-AR programs. "The WHO's recent 'One Health' guidelines recommend an integrated approach to human health and animal health. This approach is particularly relevant in rural areas such as Bodhgaya where humans and animals live in close proximity and where animals constitute an important economic asset. Animal wellbeing is, therefore, important for rural households and human health," it added.

Karmapa Office said that "the Kagyupa International Monlam charitable trust was established in 2004 to support annual prayer gatherings for world peace, and to engage in other charitable activities. Over the years, the prayer gathering has grown both in size and scope, with over 10,000 people now traveling to Bodhgaya annually to engage in prayers for world peace. The trust also organizes medical camps and distributes food and blankets annually to the underprivileged."

The press release also stated that "the animal health project will be formally inaugurated on 24th January 2014, at 11 a.m. at the Kagyu Monlam Pavilion, at Tergar Monastery in Bodhgaya. His Holiness the 17th Karmapa, Ogyen Trinley Dorjee, will grace the event along with Smt. Maneka Sanjay Gandhi, who heads the 'People for Animals' organization that she established in 1992 and which is the largest animal welfare organization in India. "