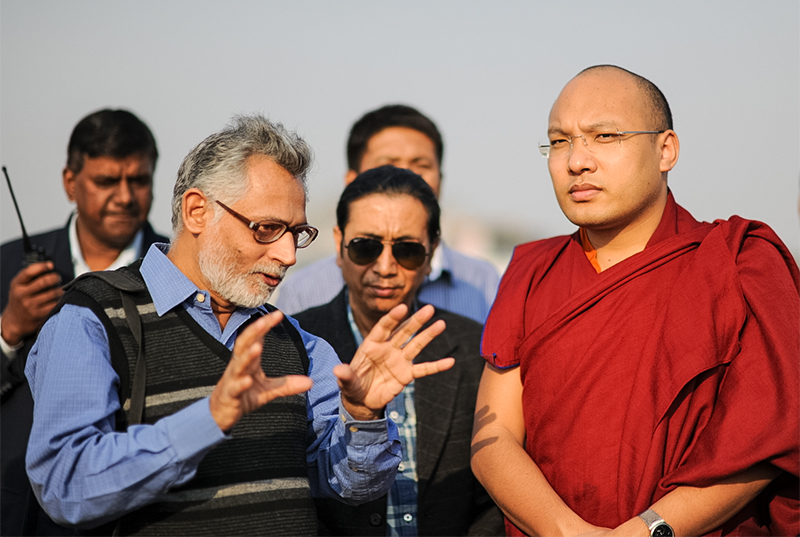 At the close of a five-day environmental conference he convened in Delhi called on China to take responsibility for the environmental emergency on the Tibetan plateau, and for India to assume a greater role in protecting Tibet's environment as well.

The 5th Khoryug Conference on Environmental Protection for Tibetan Buddhist Monasteries and Nunneries was dedicated to conservation of freshwater resources in the Himalayas, and brought together monks and nuns from 55 communities across the Himalayan region for education, problem-solving workshops and to formulate specific water conservation projects to implement in their local communities.

The conference included a trip to the bank of the Yamuna River, where His Holiness the Karmapa led prayers for the restoration of the sacred, yet highly polluted Yamuna, accompanied by the Khoryug monks and nuns and local residents, as well as Dr. Manoj Misra, Director of the Yamuna Jiye Abhiyaan organization that is dedicated to restoring the river.

Speaking at the close of the conference, the 17th Karmapa said: "Some people think the Tibetan cause is a political issue, but it is much more than that. The Tibetan plateau is of such great environmental importance that we call it the Third Pole and the water tower of Asia. Therefore, most importantly, Tibet is an environmental issue that affects all of Asia."

The Karmapa also commented: "Just because China has had control over Tibet for the past 50 years does not mean it can do whatever it likes. China has responsibilities to protect the Tibetan environment. Historically, the Tibetan way of life was in harmony with the land, spiritually and environmentally, with no negative impact on Tibet's fragile ecosystems.

This way of life must at all costs be preserved, because of the central importance of the Tibetan plateau as a source of most of Asia's freshwater. It is in India's best interest to take a more active role in ensuring that China meets those responsibilities. Indeed the Tibetan plateau is the world's Third Pole and thus its environmental well-being is of great concern to the entire world."

"However, we cannot wait for governments to act. The environmental emergency is too urgent a crisis for us to wait for someone else to do something. Every single individual must act to protect the environment, and immediately. Each of us has a responsibility to act so we can leave a lasting home for future generations," His Holiness the Karmapa said.

"As spiritual practitioners and certainly as Mahayana Buddhists, our greatest aspiration is to bring about the happiness of all beings. The conservation of our environment, which is the very ground of the existence of many billions of beings, must be our primary concern. Conservation must be the very essence of our spiritual practice."

Noting that the bulk of our water is used in agriculture, the Karmapa presented the scientific figures showing that meat consumes exponentially more water than vegetarian foodstuffs, and reiterated his longstanding appeal for vegetarianism as an environmental as well as ethical issue.

Under the auspices of His Holiness the 17th Karmapa, Khoryug is a network of 55 Buddhist monasteries, nunneries and centres working together on environmental protection of the Himalayan region, with the aim of practically applying the values of compassion and interdependence towards the earth and all living beings that dwell here.

The conference opened with an address by Union Minister of Rural Development Shri Jairam Ramesh, who urged the Khoryug association to "bring together institutions in these different countries in our region to launch a cohesive and unified challenge" to the environmental threat.