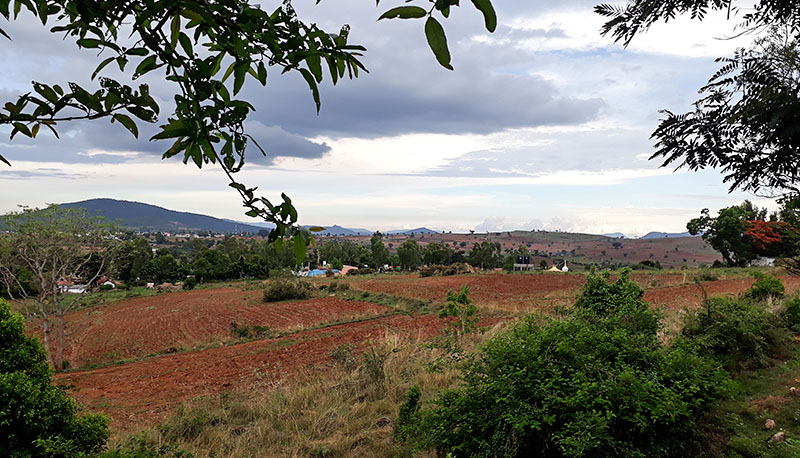 Kollegal Dhondenling settlement, Karnataka — On the border of Tamil Nadu and Karnataka lies a small Tibetan settlement of Dhondenling. After the illegal invasion of Tibet by the communist Chinese, His Holiness the Dalai Lama fled Tibet with a large number of Tibetans following behind who seeked refugee in India. The Tibetan refugees lived in tents and worked as laborers for construction of roads for several years in North India until the settlements were built.

The Chief Executive Secretary of Dhondenling Settlement, Tenzin Chodar, when asked to speak about the establishment of the settlement, said, "With the help of MYRADA, an Indian NGO, Dhondenling settlement was established in the year 1974. Most of the Tibetan people that settled here came from Gangtok where they had been staying after fleeing Tibet. People started arriving and settling here in the following years. Initially the number of people that arrived were about 3,500. The last to arrive were the people in U village. These people came from Bhutan. So the population now is about 3,600 here. The settlement is composed of 22 villages with the area range of 3124 acres."The official name of the villages are alphabets from A to V. People that came from the same place in Tibet (Phayul), formed and stayed in the same village.

"The livelihood of people in Dhondenling were and are primarily farming. After resettling here, the people were given lands. A Swiss man taught them farming and the people have been working on the fields since then. With farm, the people started rearing goats, sheep and cows. Along with farming, people also started doing the winter clothes business for extra income in large urban cities of India. So these two are the main source of income for the people. Earlier there was a weaving association initiated by Co-orporative Society but had to close down after the business didn't go well. Despite all this, most people still depend on farming for their livelihood and even grow different variety of plants in one year and built hand pumps for irrigation.

"Majority of the people being farmers, the most difficult hardships that we face is lack of water. People depend on monsoon season for the prosperity and cultivation of their farms and because of the uncertain nature of rain and the long gaps between each showers, it has a drastic effect on the harvest. 2017's harvest was good but the three years preceding it was quite bad. Monsoon season also affects the drinking water and water that is used for household purposes and so poor showers during monsoon leads to lack of water in some villages. Another hardship is that kollegal being so remote as compared to most other settlements, the business is poor. When the harvest is poor, farmers cannot resort to opening up small business to make some money as that is equally bad.

The settlement has the main head office that is the Office of representatives of Central Tibetan Administration(CTA). It administers the school, old age home and the hospital.There are in total nine monasteries, both big and small. The Local assembly monitors the works of the Office of representative of CTA. It comprises of 21 members, all the members being elected by the people. The rules and laws of the settlement are made by the members of the Local assembly.

The co-orporative society runs the workshop, the shops and takes care of providing the agriculture requirements of the people such as tractors, seeds and fertilizers. The office of Tibetan Freedom movement collects money for the freedom movement and CTA from the people of the settlement. It also makes the green book for the people which is treated as Tibetan citizenship. Other association comprises of Tibetan Youth Congress, Tibetan Women's association and the sports club.