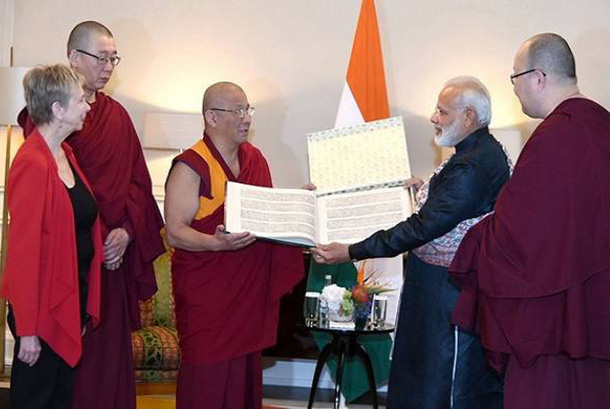 The Urga edition of the Tibetan Kanjur was only discovered in 1955, when the Mongolian Prime Minister gifted the complete set of 104 volumes, with a volume containing the catalogue, to the Indian scholar Raghuvira. Mongolia at the time was part of the Soviet Bloc, where religion was brutally repressed and the official doctrine was to destroy religious texts and documents wherever they were found.

The significance of Prime Minister Modi's gesture lies in the history of Buddhism in Russia, and of the Datsan Gunzechoinei Temple in particular. Located on the banks of the Bolshaya Neva river, the temple represents a tiny piece of Tibet in the heart of the northern capital. The temple was designed by the architect Gavril Baranovsky, who is reputed for having designed the buildings of the Russian Geographic Society, as well as the Elisseeff emporiums in Moscow and St. Petersberg. Its construction took ten years and was fraught with difficultues and obstacles as the Russian Orthodox Church tried its best to overturn the imperial edict of toleration for Buddhists, signed by Tsar Nicholas II in 1905.

Despite many protests and misinformed reports by the Tsar's intelligence agencies suspecting the temple to be an outpost for Japanese spies, special correspondence between the Tsar's ambassadors and Thubten Gyatso the 13th Dalai Lama, ensured that the Datsan was finally built and consecrated on 10th August 1915, when it was given the name of Gunzechoinei, or 'The source of the Buddha's Religious Teaching that has Deep Compassion for All Beings.

Soon after construction, the temple and the peaceful Buddhist community of St. Petersberg were plunged into the Bolshevik revolution, civil war and repression of all forms of religion under the communists. Because of its foreign connections, the datsan was largely left to operate on its own devices under the first government of Vladimir Lenin, but by the next decade, the clamp down on religious expression became much more severe. By 1935 a large group of lamas were arrested by the NKVD and sentenced to 3 to 5 years of hard labour in Siberia. In 1937 the remaining Buddhists in the city were arrested and shot the same day.

The temple survived with just a bullet to the Victorious Banner, a gold plated cylinder on its roof. During the second world war, radio broadcasting transmitters operated inside the monastery. with antennas run out of a barrage balloon. Around the same time, a Buddhist swastika was removed from the floor of the temple near its entrance. Today there is now a hole which has been patched with tiles. After the war the building became a jamming station for enemy radios, and then became a department of the zoological institute.

In 1989, after the fall of the Berlin Wall, the Buddhist community in Saint Petersburg was officially recognised by Russia. That year a service was held by the Most Reverend Lama Ven Bakula Rinpoche, the first service in over 50 years. When the communist government finally dissolved in 1991, the temple was renovated and became fully operational. A Buryatian culture centre now occupies two rooms, where children can learn traditional Tibetan songs and dances. Kalmyks, Tuvans, Altai people and anyone interested in the spirituality of the East come here. Classes on meditation and lectures on Zen Buddhism are also conducted. A Thai teacher also holds classes on Theravada teachings.

As of 2013, the temple is actively maintained and a place of learning for scholars and students of the Tibetan Gelugpa school. By giving a gift of the sacred scriptures to the historically important temple, Prime Minister Modi ensured that the deep connection between India, the birthplace of Buddhism, and Buddhists in the capital of Russia remains warm and compassionate.