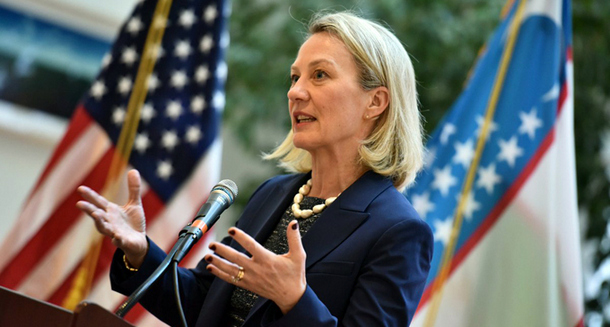 Dharamshala —United States of America on Thursday fired back at the Communist-totalitarian regime of China for its “meritless” claim that the Dalai Lama’s succession must comply with Chinese laws and regulations and reiterated that Tibetan communities, like all faith communities, should be able to select, educate, and venerate their religious leaders without any government interference.

Alice Wells, Acting Assistant Secretary of State, Bureau of South and Central Asian Affairs, said in a tweet on Thursday that “The Chinese Communist Party claim that Dalai Lama’s succession “must comply with Chinese laws and regulations” is meritless. Tibetan communities, like all faith communities, should be able to select, educate, and venerate their religious leaders without government interference. AGW”.

She also said Ambassador Sam Brownbacks’ meeting with His Holiness the Dalai Lama in Dharamshala emphasised the enduring US support for the Tibetan people, and also appreciated India for supporting Tibetan religious freedom.

"IRF_Ambassador’s meeting with His Holiness in Dharamsala emphasizes enduring U.S. support for the Tibetan people. India has greatly supported Tibetan religious freedom, and the U.S. stands in deep admiration of India’s extraordinary generosity," she added.

"Inspired and deeply moved after my meeting with His Holiness DalaiLama in India. He is living testament to the power of religious freedom to overcome hate, division, and intolerance. I’m stirred in my own faith to work harder for #religiousfreedom for all, including Tibetans," Ambassador Sam Brownback twitted after his meeting with the spiritual leader of Tibet, in Dharamshala, India.

The US Ambassador at large for International Religious Freedom, His Excellency Samuel D. Brownback was in Dharamshala last week at the special invitation of CTA President Dr Lobsang Sangay. The Ambassador’s presence here at the seat of Central Tibetan Administration gestured the strongest political support for the Tibetan people, particularly for Tibetan religious freedom.

The Ambassador, after more than hour-long meeting with His Holiness the Dalai Lama and CTA President Dr Lobsang Sangay, said the US stance on the reincarnation of the Dalai Lama is in accord with the resolutions passed at the third Special General meeting of Tibetan people.

“Earlier this month at the 3rd Special General meeting in Dharamshala, Tibetans from far and wide underscored the right of the Dalai Lama and other Tibetan leaders to identify and recognise a successor to His Holiness and rejected Chinese authorities to interfere in this process. Let me be clear! The United States shares that view,” said Ambassador Brownback while officiating the inauguration of the First International Conference on Tibetan Performing Arts at Dharamshala.

The US government under the Trump administration has bolstered its moral stance and leadership in advocating for religious freedom for Tibetan people, Uyghurs and for people of faith all around the world. Building on the success of the Reciprocal Access to Tibet Act signed by President Trump, a bipartisan Tibetan Policy and Support Act 2019 was introduced in the US Senate and House of Representatives in September this year. If enacted, the bill would impose sanctions and a visa ban on any Chinese official who interferes in the selection of a successor to seek to establish a consulate in Lhasa, the Capital of Tibet.